The Rise of the Altereds by Marisa Noelle – Book Review

The Rise of the Altereds by Marisa Noelle – Book Review 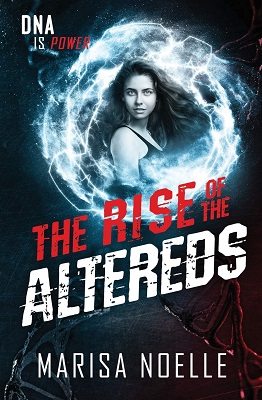 The Rise of the Altereds
The Unadjusteds Book Two

GENETIC MODIFICATION HAS BEEN OUTLAWED.

When Silver’s mother is abducted by a rogue scientist who releases a deadly new virus on the populace, she and her now unadjusted friends are faced with an impossible choice.

They can hide from the virus for as long as possible, or they can regain their abilities and take the battle to the mountains. But Silver doesn’t count on a new, rogue power growing within her. She can’t control it and soon all her friends are in danger. And there is something evil hiding in the snowy Sierras.

Can Silver learn to control her new, deadly power in time to rescue her mother as well as defeat the one who seeks to destroy them all?

‘Rise of the Altereds’ is the second story in the Unadjusteds series by British-based author, Marisa Noelle. The story is set in a futuristic USA, with the book being written in a mixture of American and British English. We reconnect with Silver and see the action from her perspective, in the first person and the present tense. She is now helping her father in his endeavour to find a cure for a deadly virus which has been unleashed by the evil scientist, Earl Landry, and threatens to destroy or alter the population. Along with trying to find a vaccine in double quick time (sounds familiar) there is also the added problem of Silver’s mother being held captive by Earl, who was a contemporary of both Silver’s parents during their student days. So as well as crushing what’s left of America, good old fashioned jealousy also plays a part in Earl’s strategy.

Those who were modified during the reign of the wicked President Bear, have now had their enhancements removed. Silver’s father struggles with the ethical dilemma of having to decide if those who wish to join the fight against Earl should have their special abilities reinstated. At the same time, Silver has a dilemma of her own. Since the slaying of President Bear, she has developed some disturbing emotion-driven dark powers which she cannot control. Her gentle romance with Matt is continuing but will his naïve younger sister help or hinder the team in their mission? Silver’s friend, Paige, also has a development of her own which has implications for the future. So the scene is set for the renewed fight of good versus evil.

It’s always difficult when the bar has been set high, to achieve the same standard with a follow up novel. Nonetheless overall, I think the author has achieved this. Several of the characters have made the crossing from the first to the second book and I think a bit more backstory for fans who read the first story over a year ago, would have been helpful to remember who was who. The structure is simple and the plot straightforward. For the first half of the book, I didn’t think it had quite the same wow factor but it’s worth sticking with it because once Silver and team meet up with a group of survivors, the pace picks up and the story flows nicely.

My biggest reservation relates to the life most of us currently live. We are in the grips of a global pandemic; therefore is this a little bit too close to home for those readers who want escapism, rather than a reminder of our current plight, albeit Earl’s virus is significantly more deadly than ours? I award four stars.

MARISA NOELLE is a writer of young adult and middle grade novels. She leans towards grounded science-fiction, urban fantasy and paranormal but mental health issues are important to her writing too. Published books include: The Shadow Keepers, The Unadjusteds, and The Mermaid Chronicles – Secrets of the Deep. You can find out more about them in the books section.

Growing up, Marisa had plenty of ideas for career and still regrets not moving to Hawaii to train dolphins and pretend the real world didn’t exist. Struggling with anxiety and anorexia lead her to the field of psychology. Heavily influenced by underdog movies such as The Karate Kid she realised her mission in life was to help other people, through any medium. Embarking on a psychology degree, she wanted to emulate her hero, Jodie Foster, from Silence of the Lambs and actually tried to secure work experience at Broadmoor. Thankfully she left the idea of criminal profiling behind, but uses many of these aspects in her novels.

What did you think of The Rise of the Altereds? Share your thoughts in the comment section below!