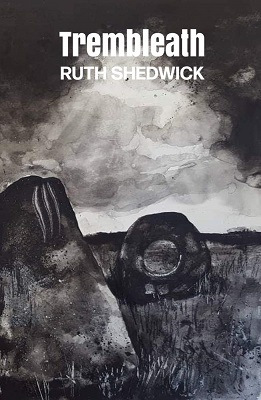 Amelia Scott is a young woman trying to re-build her life in Southern England following a disastrous relationship. It was going to be an adventure, but when there’s news of a young girl found dead and another goes missing, she quickly begins to learn there is more to Creek Bay than she could ever imagine.

A village hiding a dark secret, two families at war; newcomer Amelia Scott gets caught up in a murder investigation with dire consequences.

‘Trembleath’ is the debut novel from British-based author, Ruth Shedwick. The story is written in the third person and the past tense. The cover is dark and menacing so we know it isn’t going to be a light-hearted read. I appreciated the use of Cornish numerals for each chapter to help with the backdrop. The story opens with a tried and trusted hook which I hoped would bode well for what was to come.

The main protagonist, Amelia Scott, is a newcomer to the village of Creek Bay and struggling after a relationship breakup. She meets a volunteer coastguard, Seth, in a dramatic way when he saves her from a life-threatening situation and he subsequently offers her a job in his bookshop. We are also introduced to the enigmatic William, with whom Seth seems to have history. The first murder victim is discovered and the scene is set for the mystery to be unpicked.

Unfortunately, my initial enthusiasm waned as the story progressed because the structure became loose. There were tantalising hints as to the direction the plot might take but these didn’t develop. I was looking for themes, layers, devices, emotion and above all, I really wanted to care about the characters.

Credibility questions arising in the first chapter are definitely something any author wishes to avoid. I was intrigued by the concept but quickly became frustrated with the lack of attention to fact-checking detail. The briefest of internet searches would have ironed out these anomalies.

Stephen, the detective inspector, seems incongruous and lacking in depth. He appears to work autonomously without being inhibited by protocol or procedures. The murder, which I expected to be central to the plot, became almost insignificant and other than knowing the victim’s name, we learn little about her. We don’t see the impact her death has had on her family or the village, so she remains two dimensional.

Timeframes bothered me with Amelia’s broken heart seemingly mending quickly. In the space of a week, she had received advances from three men and seemed amenable to all of them. She grasps how to catalogue books in Seth’s shop, operate the till and master the intricacies of the coffee machine in the space of two hours. I suspect any trained baristas will find this irritating.

I feel more research and plot development were needed before publication. I’m unsure what message the book is trying to convey. Is it a tale of self-discovery bound up in a love story? Is it a fight of good versus evil? The end was fairly abrupt with little in the way of conclusion so fans of Ruth Shedwick will have to wait for the next instalment to see how the story develops.

I think the author had some interesting ideas and liked her descriptive passages. I confess to having issues with aspects of the work but believe she is someone to watch and on the basis of future promise, I award three stars.

Ruth Shedwick graduated from Liverpool John Moores University with a degree in Environmental Planning. Her passion for the natural environment and love for creatures great and small is evident in her writing. She currently lives on rural moorland on the edge of ancient woodland and shares her home with four cats and a wolf.

Since an early age, Ruth has been intrigued by the ancient world, folklore, myths & legends and explores the unknown. Her works include contributions to Dark Carnival: An Anthology of Horror featuring international authors, with future novels currently with publisher. More short stories are available on her site.

Ruth has a passion for creative design and is also looking to further her acting career.