Sponsored Post. Today we welcome author M.J. Keeley to Whispering Stories with his Promotional Post for his new book ‘Turning the Hourglass‘, which was released on 24th April 2019. Keep scrolling down to read an extract from the book and watch the trailer too.

Historian Dyrne Samson doesn’t want to read about the past anymore. Now he visits it.

Abandoning University lecturing, he joins a classified research organisation, hidden beneath the streets of New London. Their time-distortion pods let him witness crucial moments throughout history. But when observing the past, Dyrne discovers that he can also change it. Of course, visiting events from his own life is forbidden – the only reason he can’t return to the day he’ll never forget… unless he can manipulate the rules.

– It weighs up the morality of making atonement for our own mistakes. 5 Stars

Dyrne’s hands glistened blue under the electric light tubes. He rubbed his palms on his trousers as the elevator clunked downward and a drip trickled from his armpit to his bony hip.

Juddering to a halt, the cage doors rattled open, and he stepped into the corridor that stretched ahead like elastic. His heels clipped the concrete floor as he passed under the white lights dotted along either edge of the ceiling. Silver doors lined the way, all labeled with numbers and complex names of equipment, half of which he still didn’t understand. The air was much cooler down here and apart from his own echoing footsteps, the only other sound was the muffled buzz of machinery behind thick walls.

Reaching the end of the tunnel, Dyrne glanced right, wondering if he might catch sight of Phoebe leaving one of the chambers, but the heavy doors were all clamped shut. She must still be in the middle of a visit. Turning left instead, he marched toward the entrance of the one open room. Pod chamber 3.

Dyrne faked a smile and shuffled inside the dim, stone room. The electronic hums and clicks emanating from the control panels around the walls were louder in here. On a dais against the back wall stood the pod itself: the waiting pink sphere barricaded behind metal railings. Alex sat in his chair on the raised platform, wheeling from screen to screen, tapping buttons and pressing lights with quick fingers.

Dyrne coughed before asking, “can I change now?” He wiped his palms on the small of his back now.

“Sure. Go ahead and suit up,” Alex called over his shoulder. “Everything’s pretty much ready.”

Turning to the corner-bench by the door, Dyrne pulled the flapping, grey bodysuit from the shelf and unfolded it with care. He’d perfected each swift step of the process. He faced away from Alex, tugged off his shoes, unzipped his trousers, slid them off and flung them onto the shelf. Halfway. Next, he stepped into the elastic suit, pulled it up over his shins and thighs, unclipped the white shirt, tossed it to the floor, yanked the rest of the suit into place, and zipped it to his collarbone. His scars remained hidden. A small success.

Dyrne realised he’d been mumbling to himself again.

“Well, when you’re finished saying nothing to yourself…” Alex had twirled in his chair to face Dyrne, grinning. The physicist’s madly-patterned shirt beamed from behind his unclipped labcoat. “You ready to see how all this shit started?”

Dyrne stepped toward the pod. A section of railing had unlocked itself, and the neat door slid open, inviting him in. He climbed the stone stairs to the platform and crossed the threshold, stepping inside the enveloping orb. It supported his weight without budging. He touched its pearly smoothness with both hands.

“Yes…” Dyrne replied, too busy picturing what he might find to laugh.

The sheath door glided into place behind him. Click. The pod chamber sounds beyond the sphere became muted as if he’d been submerged underwater. Static shivered in his ears. Then the familiar shuddering overhead. The groan and whirr of gargantuan machinery shifting, compressing all its power into this little egg. He swallowed a throatful of sand. The rosiness of the surrounding shell began to swirl and melt, like ink dropped in water. The pink twirled into brown, black, navy, green, lime. Then the smoothness of the concave pod morphed and melded into angular shapes and lines and edges. Objects. Furniture. Walls. Shelves. A flat ceiling. Carpet. The light settled into mustard. Dyrne stepped forward and felt the now-invisible pod move under him. The surrounding images of the dull room shifted with him.

He was here. The desk in front of him. And behind it, the slumped President.

Watch the trailer for Turning the Hourglass 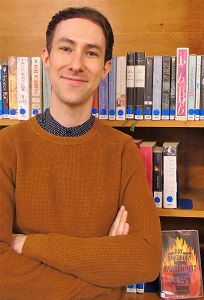 Matthew J Keeley is a writer and teacher from Central Scotland. Turning the Hourglass is his debut sci-fi novel, published by Black Rose Writing. He has also had short fiction published by Centum Press, Medusa’s Laugh Press, Mother’s Milk Books, Havok magazine and Snack magazine. In addition, he is a contributing writer for award-winning online arts magazine The Wee Review.