Voices from Stone and Bronze by Caroline Davies – Book Review

Voices from Stone and Bronze by Caroline Davies – Book Review 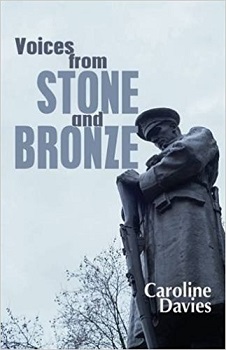 A moving, honest and never sentimental collection that gives a voice to London’s many war memorials.

In her second poetry collection Caroline Davies turns her attention to the War Memorials of London. Voices from Stone and Bronze brings to life those who fought and died and those who survived, including some of the sculptors who had themselves come through trench warfare to a changed world.

This is a short book of beautifully forged poems, about the people in the first and second world wars. Ms. Davies has clearly very carefully researched, and sensitively delivered vignettes of these people.

The presentation is unusual in that many of the poems are written in the first person, becoming the voice of the soldier, sculptor or family member. This makes their stories feel very immediate and somehow crosses the cultural and historical gap. I recognised my grandparent’s generation in the way her characters spoke, and in their attitude to life.

The first poem struck me hard, as a mother myself I felt for the woman whose strong healthy child was now just a name on a memorial. It wasn’t just the waste of a fine young man and the life they had, but also the loss of times they would have had together. The people who were left behind had to be courageous too, and are often not seen.

The poems then start looking at the war memorial statues. Imagining the sculptor and the sitter, the conversation they may have had. The memories and flash backs the sitter has remind you that this was a real soldier who had to fight for his life, kill or be killed as many of his friends were. This leads to the statues coming to life the banter they have amongst each other, and of course their war experiences relived as in post-traumatic stress. They look down at present day life and seeing a homeless man, sense that he was an ex soldier, possibly traumatised by war and also suffering with PTS.

There are many short individual stories that bear witness to the everyday horror of life at war, the collection of identity discs from decaying corpses, what it felt like to be shot at and the mud at the bottom at the trenches. The story of the brave soldier who repeatedly retrieved wounded soldiers under fire, they survived but he did not! It made you think about the value this brave man had put on these soldier’s lives, and the enormity of the waste of life.

Another poem about soldiers having masks made to hide their damaged faces, as if by hiding their faces their stories could become acceptable. It would never work, these men were never going to be the same again, it just seemed to put another burden onto these unfortunate brave men who had suffered already so much.

War is a dark subject sometimes gruesome and gory, but lightened by a heightened sense of emotion and pity. Caroline writes with quiet confident words, that don’t dramatise or sentimentalise war, but are still full of emotion. I was particularly struck by “Gone to War” someone who enjoyed writing, lifted from ordinary life to the trenches and his death.

The final words “Your poems rise like ghosts of men” is what this book is about to me. 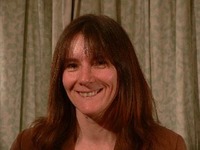 Caroline Davies was born in Norfolk to Welsh parents. She has a Diploma in Literature and Creative writing awarded with distinction by the Open University.

Her second poetry collection, Voices from Stone and Bronze was published by Cinnamon Press in 2016. It is inspired by the war memorials of London, France and Wales. Voices from Stone and Bronze brings to life those who fought and died and those who survived, including some of the sculptors who had themselves come through trench warfare to a changed world. Meticulously researched and deeply humane, these narrative poems apply a lyrical sensibility without sentimentalism; a deeply affective collection.

Her first collection, Convoy was inspired by the experiences of her grandfather, James ‘Jim’ Honeybill, who was a merchant seaman. He was with the Blue Funnel line and served on M.V. Ajax during the Malta convoys.