Absent in the Spring by Carrie Elks – Book Review

Absent in the Spring by Carrie Elks – Book Review 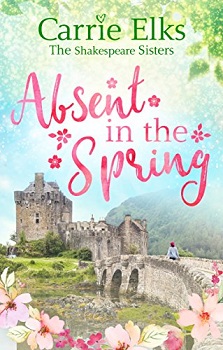 A successful lawyer, and the eldest of four sisters, Lucy Shakespeare is used to being in control of everything and everyone around her, most particularly herself – until she meets the gorgeous Lachlan MacLeish.

Lachlan’s hired Lucy because he needs the best. His inheritance is suddenly in doubt, thanks to his devious half-brother and there’s no way he’s going down without a fight. The very last thing he wants is a distraction, but as soon as he sees Lucy, he knows he’s in trouble.

Despite their efforts to resist, it isn’t long before Lachlan has Lucy longing to break all her careful rules. As they travel from Scotland, to Paris and on to New York, Lucy can’t help but wonder: is it sometimes worth risking it all?

Absent in the Spring is the third book in the Shakespeare Sisters series by Carrie Elks, with Summer’s Lease being book one and A Winter’s Tale being book two.

Each book follows the life of one of the four Shakespeare sisters. This time we get to spend our time with the eldest sister Lucy Shakespeare, who is a lawyer living and working in Edinburgh, Scotland.

Lachlan MacLeish lives and works in New York. His father recently died and in his will left him Glencarraig Castle in Scotland and the Lairdship that comes with it.

However, the will is being contested by his half-brother Duncan MacLeish, as he believes that he should be the rightful heir to the castle and the title, as Lachlan was the illegitimate son of his father, although the oldest of the two.

Lachlan needs the best lawyer in Scotland to help him win the case, so hires Lucy. If anyone can win she can, with her no-nonsense, tough attitude. The two though don’t expect to find themselves highly attracted to one another. Can they manage to keep their relationship strictly professional?

Once again Carrie Elks has written an absolute joy of a book. One that had me hooked from the very first page. The whole setting, from Scotland, New York, Miami, and Paris had me pining for a holiday as the places sounded so amazing. The characters were all such a delight to spend my time with, perfectly realistic and very relatable too.

Lucy is normally a stickler for the rules and a workaholic, but something comes alive in her from the moment she meets Lachlan. She is a very professional woman and doesn’t like feeling like a teenager, having tingling moments every time Lachlan’s name is mentioned.

Lachlan himself is a workaholic too, spending his time between his head office in New York and one of his businesses in Miami. He’s had to work so hard to get where he is now, whilst Duncan had everything handed to him on a plate, so he’s not giving up the castle that easily. His father obviously wanted him to have it, and have it he will.

Both have issues to deal with in regards to ageing, sick parents. Ms. Elks has clearly done her research as these parts were written with such finesse and thoughtfulness. Having watched a member of my family suffer from dementia, I can honestly say that Oliver Shakespeare’s character (The sister’s father), has been written so accurately to what I personally witnessed.

What I truly like about this series is how the sisters from the previous books, make numerous appearances in this one too. I enjoy seeing how their stories carried on after the end of their books.

This is a feel-good, uplifting novel that I enjoyed immensely. I now look forward to reading the last in the series, book four, and getting to meet the last sister Juliet and her daughter Poppy properly. Although I’m not sure that I want the story to end, it has been a wonderful series, one of the best I’ve read in a long time.