When The Serpent Bites by Nesly Clerge – Book Review

When The Serpent Bites by Nesly Clerge – Book Review

Frederick Starks has it all—a gorgeous wife who was his high school sweetheart, three beautiful children, a mansion and cars others envy, millions in the bank, respected in his community, admired by his employees, loved and respected by loyal friends. He revels in the hard-earned power and control he’s acquired. As the saying goes, “All that glitters is not gold,” which Starks discovers when gut-wrenching betrayal by his wife sends him over the edge and into a maximum security prison.

There, Starks is a new “fish,” stripped of nearly everything he’s always relied on. In that place, where inmates and guards have their own rules and codes of conduct, Starks is forced to face the darker side of life, and his own darker side, especially when the betrayals, both inside and outside the prison, don’t stop. He must choose which path to follow when the line between right and wrong becomes blurred: one that leads to getting out of the physical and emotional hellhole he finds himself in or one that keeps him alive.

When the Serpent Bites is the first in a trilogy of books by Nesly Clerge. The book opens with Starks (our main character), still reeling from finding out that his wife cheated and makes the choice to confront the man she was cheating with, even though it was roughly a year later.

This seems to be the beginning of the end for our main character Starks. It is the beginning of a dark road that he ventures down and one can hope that he finds the light at the end of the tunnel. With that being said When the Serpent Bites does dive a bit deeper into the storyline than I have found with other books. Not only does it look at Starks, but all the things that have moulded and shaped him into the person he became.

The story itself is very well written. Clerge took great care in not only creating his characters but also making them believable. While it is a work of fiction I could tell the research that was done and the hours taken to craft them in the way that best fits the story. Each character is very well thought out and the interaction, including flash backs, show how Starks views each encounter.

I will say that Starks does give the impression of being a control freak, everything in its place, he also can only see the way certain actions of his impact an entire situation. Even with that being said I was intrigued at the narrow minded view of the situations that Starks seemed to have, almost a victim mentality. This specific character is written in such a way that even when he begins to see that he has some fault in the situation, he is able to totally disregard it and return to placing blame on those around him. Will there be an “Ah HA” moment? Probably but not until the final book in the trilogy.

Each character plays its role well and helps the story move forward which keeps it from stagnating while the author tries to fill in the gaps until the end. There are very few lulls and even during those times you can feel the wheels turning to the next point in the story. What does bother me slightly is even with all of the things going on Starks does remind me of the old mobsters that still have the ability to move things on the outside from behind bars.

This is where it did become a strong fiction piece for me because while Starks seems to be careful with what he does, he is careless at the same time. Even with that though the storyline is good, the characters are strong well written characters, and the interactions are rather believable. Will I read the rest of the books in the trilogy? Yes I will. Clerge has written one heck of a book and I hope the rest are just as good. 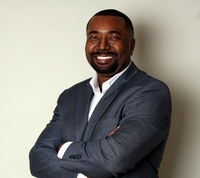 Nesly Clerge received his bachelor’s degree in physiology and neurobiology at the University of Maryland, and later pursued a doctoral degree in the field of chiropractic medicine. Although his background is primarily science-based, he has finally embraced his lifelong passion for writing.

When the Serpent Bites, is Clerge’s debut novel, the second book in The Starks Trilogy, When the Dragon Roars, is now available. The trilogy books explore choices, consequences, and the complexities of human emotions, especially when we are placed in a less-than-desirable setting.

When he is not writing, Clerge manages several multidisciplinary clinics. He enjoys reading, chess, traveling, exploring the outdoors, and spending time with his significant other and his sons.