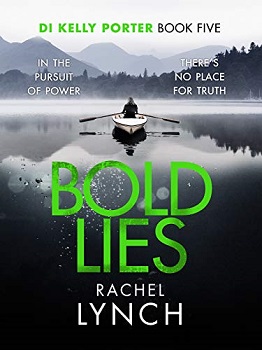 An investigation leads Kelly back to her former command… and the ex who betrayed her.

A brutal murder in the Lake District.

A double assassination in a secret lab in London’s west end.

Seemingly unconnected, unexpected links between the gruesome crimes emerge and it’s up to DI Kelly Porter to follow the trail – all the way to the capital.

Back amongst old colleagues and forced to work alongside her calculating ex, DCI Matt Carter, Kelly must untangle a web of deceit that stretches into the highest echelons of power. A place where secrets and lies are currency and no obstacle is insurmountable.

Detective Kelly Porter is back for the fifth installment in her namesakes series. This time Kelly is investigating the execution-style murder of a man found on a boat at Derwent Water in the Lake District. The man isn’t a local, it seems he was just visiting the area and that where he was found wasn’t the murder scene, the scenes been staged.

In her old policing ground in London, two more bodies are discovered in a garage. They too have been moved and made to look like they were engaging in a sexual act. With all three working for the same company, Ravenswood laboratory, Kelly knows that she is going to have to go back to London and carry on her investigation there, but with her ex still in the force, DCI Matt Carter, this isn’t going to be an easy trip.

With corruption overflowing Kelly and Kate, who she has taken to London with her, as going to have to work hard to solve this case.

I read the first two books in the Detective Kelly Porter series last year – Dark Game and Deep Fear but then I never got around to reading books three and four, so when book five appeared I wasn’t sure whether I should read the other two or just jump straight in. After a discussion with the publishers they said it should be fine as I’d read the first two, so I tentatively began.

I shouldn’t have worried though as there were only small sections I didn’t really follow such as Kelly’s relationship with her father, I don’t actually remember him in the first two books so this was new to me. The book also features less about Kelly’s personal life than the first two in my opinion.

The pace is fast throughout and Kelly is at her best. She is a character I have come to enjoy. She is feisty and strong-willed but also human and flawed, basically, she is very realistic. I also loved that she has toughened up since working in Cumbria and now back on her old stomping ground she isn’t going to bow down to anyone, especially those that did and do try to make her life as uncomfortable as possible.

I enjoyed this book immensely and I believe anyone who enjoyed the TV series ‘Line of Duty’ will love this book too as there is plenty of corruption to go around.

Rachel Lynch grew up in Cumbria and the lakes and fells are never far away from her. London pulled her away to teach History and marry an Army Officer, whom she followed around the globe for thirteen years.

A change of career after children led to personal training and sports therapy, but writing was always the overwhelming force driving the future. The human capacity for compassion as well as its descent into the brutal and murky world of crime are fundamental to her work.