The Willow By Your Side by Peter Haynes – Book Review

The Willow By Your Side by Peter Haynes – Book Review 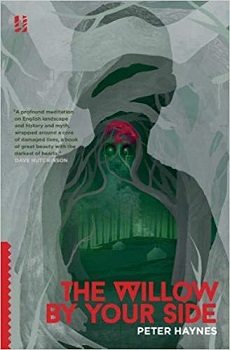 The Willow By Your Side

How long has it been since we took ourselves into the forest that early New Year? Fast and safe, your footfalls placed as if you knew the way by heart, we crossed the pasture to the frozen river and on to the far country beyond. Were we driven away from home? I wonder if you were following a Siren’s song: flute and lyre drifting on the cold wind. Or maybe we were just lost children instead of questing heroes.

“Come here when you want to wish for something,” you said, smiling.

Youth. The woods. Dreams and portents. Magic runs through all of them. But in the aftermath of war a young boy is twisted and tested trying to hold his family together. As his sister recovers from a terrible assault by her father, she teaches him about the magic in the land, the tombs of ancient kings and the wishing lake, about the treacherous Red Cap and the places deep in the woods where the adults don’t go.

But when she disappears, the balance fails. Parents divided by their pain and all eyes in the village turn to the father, a man who brought his own nightmares back from the war. They search the woods, pushing deeper into the strange spaces where myths grow with the trees. But only the boy knows the secret paths they took, and the way to the lake where wishes come true.

A story of the potent and dark spaces of folklore, The Willow By Your Side is the finest of British fantasy. Channelling Robert Holdstock’s Mythago Wood and Catriona Ward’s Rawblood, Haynes plunges deep into the landscape, peeling back the delicate rules of the British identity, and what we hide beneath it.

This book is comprised of two different stories wrapped around each other so tightly that the lines between them are a blur. On one side, a young boy is narrating the events of the day to his missing sister – his father returned from the war with what we can only imagine is PTSD, their family has a very different dynamic now he’s returned and they’re all trying to find a new balance around his mood swings and refusal to discuss anything about the experience of war.

On the other side, the boy and his sister go on adventures through the local woods and she tells him stories about the supernatural things that happen there, about the old king buried under the hill and other fairy tales.

It’s a perfect example of the unreliable narrator – are these things real or are they just something that a 12 year old believes in because he’s a child? The answer to that question isn’t answered quickly, so it drove me insane right up to the conclusion!

I’m personally not a fan of the first person unreliable narrator set up in general, so I got grumpy with the delayed gratification of it all, but the fact that I finished the book and was happy to let it lead me to the answers goes to show well written it is. The author has a wonderful writing style that not only brings a Gothic fairy tale atmosphere to life, but that of a struggling family trying to get their lives back on track after the war.

The part I found particularly insightful was the author showing us how the return of a soldier could impact an entire family rather than just the one person, that children can’t just be children when a parent brings their nightmares home with them after witnessing atrocities.

All in all, this is an exceptionally well written and suspenseful book!

Peter Haynes is a BSFA-nominated writer. Hailing from the wilds of Devon, he currently lives in Birmingham, UK where he writes novels and short fiction.