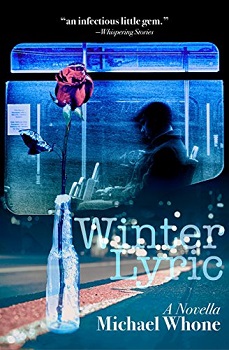 Winter Lyric is the poetic and emotionally touching story of Elliot Stephenson, a thirty-one year old ex-musician. Elliot is down on his luck, jobless, and hasn’t had love in his life since being struck with schizo-affective disorder, a bipolar form of schizophrenia, ten years ago.

Elliot’s life is turned right-side up again when he meets Sarah Benton, a twenty year old environmental science major. Together, they bond through adventurous drinking-in the city, outdoors, and while performing music. An alcohol-infused romance arises, but the emotions may be too much for Elliot, in his sobering and philosophical realisations of love.

Michael Whone cleverly weaves together, in his first major work, a story of the transcendence of love, lost innocence, self-discovery and the societal boundaries that are characteristic of the scatterbrained nature of the talented and exceptional Elliot Stephenson.

This book is an infectious little gem. I found the character of Elliot totally convincing and that was all down to Michael Whone’s excellent, if unorthodox writing style.

The narrative is written in the first person and to begin with, appears somewhat haphazard with several characters mentioned and Elliot’s recollections coming in random order. But that was the real beauty of the work as that is exactly how someone with Elliot’s condition would tell the story. Michael Whone has either done some exceptional research or he is also wired that way.

Whatever the inspiration, Michael Whone managed to maintain the style throughout the book and by the end I found myself totally captivated by Elliot. Yes, he drinks and smokes too much, he is directionless and he has muddled priorities but he is getting through life in the best way that he can manage.

I could be critical and say that the storyline is thin but that was because the book was about a true to life character and his relationships with those close to him, particularly his love for Sarah. It is undoubtedly a romance but a romance of the real world seen through the eyes of a man. As such it would be appreciated by any adult readers, male and female.

Michael Whone is to be congratulated on an outstanding piece of work. I have awarded four and half stars.