The Wolf, The Duck and the Mouse by Mac Barnett – Book Review

The Wolf, The Duck and the Mouse by Mac Barnett – Book Review 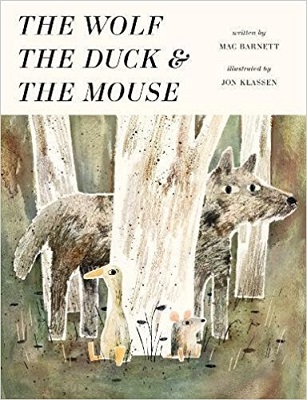 The Wolf, The Duck and the Mouse

Early one morning a mouse met a wolf and was quickly gobbled up… When a woeful mouse is swallowed up by a wolf, he quickly learns he is not alone: a duck has already set up digs and, boy, has that duck got it figured out!

Turns out it’s pretty nice inside the belly of the beast – there’s delicious food, elegant table settings and, best of all, dancing. And there’s something more: no more fear of being eaten by a wolf! Life’s not so bad, considering the alternatives.

That is, until a hunter shows up… With a nod to traditional fables and a wink to the reader, the award-winning Mac Barnett and Jon Klassen of Sam and Dave Dig a Hole, Extra Yarn and Triangle offer a tale of cooperation and creative cuisine that is sure to go down easy.

One day a wolf found a mouse and gobbled him up. When the mouse reached the wolf’s stomach, he discovered that he wasn’t alone, there was a duck asleep in bed.

Duck was surprised to see Mouse, as much as Mouse was surprised to see Duck. It did not take the two long to become good friends. The two of them cooked together, ate wonderful meals together and had fun. However, all their fun made the wolf sick, which in turn made him unable to run away from the hunter who wanted to kill him.

But Duck and Mouse had a plan to scare the hunter off, but it would mean that they had to leave the place they now called home.

The Wolf, the Duck and the Mouse, is a very unusual book in which two of the characters are eaten by the third, but rather than be sad about it or die, they enjoy living inside the wolf.

The illustrations by Jon Klassen suit the story perfectly with his unusual style of drawing, almost like rough sketching, or a first draft.

The book is a wonderful read, and will have children enthralled in the three animal’s adventures. It also explains (not factually), why wolves howl.

He’s on the board of directors of 826LA, a nonprofit writing center for students in Los Angeles, and he founded the Echo Park Time Travel Mart, a convenience store for time travelers.