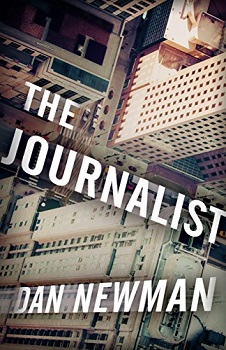 In the middle of the night, in war-torn Rwanda, journalist Roland Keene leaves his hotel to find armed rebels to interview. Some would call it a suicide mission. Roland would agree.

Keene has started at the bottom, living paycheck to paycheck, running from the bookie to whom he owes this and next month’s rent, and trying to make his mark at one of his shining city’s great papers. With no big breaks coming his way, though, Keene decides to make his own. He orchestrates a robbery―one designed to cast himself as the hero―but it goes all wrong and turns into a high-profile murder.

Despite everything, Keene’s role as a “white knight” gets him favor with the victim’s father, and a foot in the door of the newsroom. Immersed in the cutthroat world of investigative journalism, he breaks another story―this one of citywide corruption―but also starts accumulating powerful enemies among his colleagues.

Though Keene’s work as a foreign correspondent keeps him on the road―and at arm’s length from his problems―it doesn’t stop him from being hounded by the people he betrayed on his way to the front page. What will happen to the great Roland Keene if his crimes are revealed, and to what lengths will he go to ensure his secrets never see the light of day?

About sixteen months ago I reviewed Dan Newman’s previous book The Clearing. I gave that book five stars so I was looking forward to this book. Could he repeat that high standard?

Both books draw on the author’s journalist background and his nomadic childhood. On this occasion Newman uses his knowledge of southern Africa to give us an insight on the local people and how they are manipulated by the richer parts of the world.

The two books differ in that The Clearing was a dark mystery whereas The Journalist is the study of one particular character. The entire story is written from the perspective of Roland Keene who is young, ambitious and with little to lose. He is determined to be the best and he will use every opportunity to get there.

As one would expect from a trained journalist, Newman writes in a good descriptive style. Whether he is describing a millionaire’s mansion, a student bedsit or a mud-floored shanty home you feel you are there. The support characters are also interesting and believable. I particularly enjoyed hearing about Rhona, Professor Bowman and my favourite, Trots who despite his nefarious nature had his own very clear principles.

However as good as the descriptions and the side characters are, the strength of this story is in the character of Keene. You may admire him, you may be frustrated by him, you may well have worked alongside a version of him but whether you love or loathe him you will be drawn into the character.

With two excellent books behind him Dan Newman deserves success. I look forward to more from him and award The Journalist five stars.

Dan Newman counts his having been raised “in-transit” around the globe as his most valuable education – despite a Masters degree in Journalism.

The son of a globe-trotting international development worker, Dan grew up in St. Lucia, Lesotho, Swaziland, England, Canada, and Australia. Ask him where he comes from and you’ll get a puzzled look, but it’s left a love of travel, writing and far-flung places.

He now lives with his wife and son just outside of Toronto, Canada.

You can find out more about Dan in his interview – ‘The Writing Life of: Dan Newman‘