The Wonder of Us by Kim Culbertson – Book Review

The Wonder of Us by Kim Culbertson – Book Review 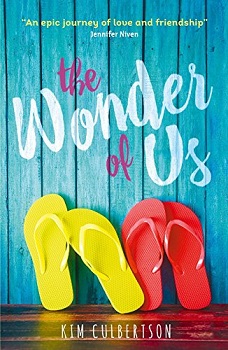 The Wonder of Us

Riya and Abby are: Best friends. Complete opposites. Living on different continents. About to embark on an epic adventure around Europe.

Since Riya moved away with her family to Berlin, she and Abby have struggled to be there for one another, and they haven’t spoken in weeks.

But Riya is pretty sure she knows the perfect way to make things better – a grand tour of European cities. Two weeks, six countries, unimaginable fun.

Can the lush countrysides and dazzling cities of Europe fix their friendship, or does growing up mean growing apart?

Teenagers Abby and Riya had been best friends since they were little children. They were never apart until the day Riya moved from her hometown in Yuba Ridge, California to Berlin, Germany with her family. Whilst Riya was getting to know her new hometown and school, Abby’s life was falling apart as her mum left her dad for another man.

With the two so far away from one another they tried to talk on the phone or Facetime as much as possible, but with resentment creeping in from both of them, their friendship started dwindling. Not wanting to lose her best friend, Riya has a brilliant idea and soon afterward Abby receives airline tickets in the post.

Riya has invited Abby for a two week all expenses paid tour of six European countries, there is only one catch, Riya cousin Neel is escorting them and he’s a bit of a stickler for the rules. There’s also the matter that Riya might have an ulterior motive for this trip too!

The Wonder of Us is a cute YA book that features interesting characters and vibrant cities. Throughout the book, the best friends visit Italy, Switzerland, Germany, Scotland, Iceland, and England. Abby is a history buff and loves everything from the past, especially The Seven Wonders of the World, so Riya tries to make the trip as interesting for her as possible, showing her new wonders that can be found in each city.

The main aim of the trip though is to try and become close again and repair the damage that has been caused between them, however, the girls seem reluctant to actually speak about what has happened and try to brush it under the rug, which over time causes more friction between them.

I really enjoyed the plot, visiting the numerous countries and learning so much about each of them. I do have a little problem with how much time we got to spend in each city. For example, we head to Florence, Italy for the first ‘Wonder’ and this takes up 66 pages. When we visit London, England this only covers 31 pages and lacks the detail that the earlier countries did. For each country we visited the number of pages dedicated to that country reduced. I would of love to of seen a nearly equal amount to each.

The book is told from dual points of view by both of the girls. Now I’m not normally one for dual or multiple narratives but for this book to work it really needed it. The chapters are told from alternating POV so you always know which girl you are spending time with.

Whilst the girls were typical teenagers and sometimes fun, sometimes moody, I really enjoyed getting to know Neel. He is one eccentric young man who is wise beyond his years, yet still, a teenager inside, even if he doesn’t like to show it often.

The book was great fun to read and shows you the importance of friendship and that just because someone is thousands of miles away it doesn’t lessen their feelings for their friends. It also shows the reader that sometimes you need to learn to stand on your own two feet and face the world.

Much of her inspiration comes from her background teaching high school since 1997. In 2012, Kim wrote her eBook novella The Liberation of Max McTrue for her students, who, over the years, have taught her far more than she has taught them. Kim lives in Northern California with her husband and daughter.