This week on ‘The Writing Life of:‘ I am thrilled to be interviewing author C. J. Tudor. C. J. will be sharing with us detail of her writing life, telling us all about her latest book ‘The Chalk Man‘, which was released on 11th January 2018, and answering a few fun questions too.

So without further ado I’ll hand you over to C. J. Tudor 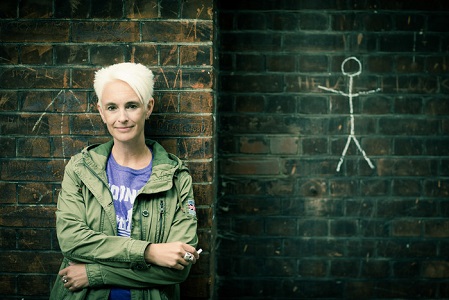 C. J. Tudor was born in Salisbury and grew up in Nottingham, where she still lives with her partner and young daughter. Her love of writing, especially the dark and macabre, started young. When her peers were reading Judy Blume, she was devouring Stephen King and James Herbert.

Over the years she has had a variety of jobs, including trainee reporter, waitress, radio scriptwriter, shop assistant, voiceover artist, television presenter, copywriter and now author. The Chalk Man is her first novel.

Be an actress, journalist or vet – basically, I liked make-believe and animals!

I’ve always been a writer. I just never thought I’d get to do it for a living.

I didn’t. I left school at 16 (even though I got good grades, I didn’t have a fun time in the last two years of school). I did a lot of other jobs – filing clerk, waitress, shop assistant, trainee reporter, radio scriptwriter, copywriter, TV presenter, voice over, dog-walker. I still wrote on and off but I didn’t knuckle down to it properly till my mid-thirties.

Now my little girl is at school, I take myself to a coffee shop and write for three or four hours in a go. I don’t do word counts or any of that rigid stuff. I write as much as I feel like and then go and do something to clear my head for a bit – walk, go to the gym. Fortunately, I usually feel like writing a lot and I write fast!

Nope. I only chose C. J. because I felt that Caroline was a bit flowery for a crime writer and Caz – which is what everyone calls me – didn’t seem ‘authorly’ enough!

I’ve got a lot of strange habits but none connected to writing!

Oh God, my handwriting is appalling. Plus, it would take me hours to write a single page longhand. Laptop all the way!

I’ve got two pretty awful unpublished books and a couple of unfinished ones I quite like that I may return to. So, I’ve written six in total, including the next one to be published.

Pantster all the way. If I tried to plot I’d be bored before I started. In fact, I’d never start. And if I did, I’d change it anyway. I like the journey, discovering new twists and turns as I go along, taking diversions I didn’t foresee when I started. For me, it keeps it interesting. Plus, I’m a big believer in fixing things in the edit. Get the story down on the page then deal with it!

When the first proofs went out, I read the early reviews. But the more people who read your book the wider a mix of opinions you get. You can’t please everybody.

So, yes, I’ve had negative reviews. They’re not nice but people are entitled to express what they think, although there’s no excuse for abuse.

The best thing is to take all reviews – the good, the bad and the ugly – with a pinch of salt. I’d give myself a solid 3/5 and I’m good with that! 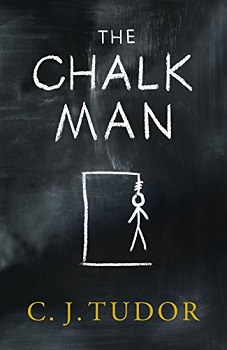 It began back in 1986, at the fair, on the day of the accident. That was when twelve-year-old Eddie met Mr Halloran – the Chalk Man.

He gave Eddie the idea for the drawings: a way to leave secret messages for his friends and it was fun, until the chalk men led them to a body.

Thirty years later, Ed believes the past is far behind him, until an envelope slips through the letterbox. It contains a stick of chalk, and a drawing of a figure.

Is history going to repeat itself?

Was it ever really over?

Will this game only end in the same way?

I started writing the book in June 2015 and it took around 6 months for the first draft. I signed with my agent in May 2016 and got my book deal in September 2016. From the idea to the book being published – two and a half years. It takes a long time to get a book out there.

Eddie Adams/Munster was actually the name of a character in another unfinished book. I liked it so much I decided to use it in The Chalk Man. The rest – I couldn’t really tell you. Sometimes, it’s like characters just drop, fully formed, onto the page. I seriously can’t remember ever sitting there and thinking about names at all.

Eddie is a big of a geek as a child – the odd boy who likes to collect things and is quite studious. His home life is a little chaotic – his parents don’t have what you’d call ‘traditional’ jobs.

As an adult, he’s a rather careworn, lonely figure, somewhat trapped in his old house and home town. In many ways, Ed is the opposite of a likeable character. He doesn’t make good decisions. He’s more than a little weird. He’s not heroic or handsome or sexy. But he also has a dark sense of humour that – I think – makes him quite endearing. It’s often people’s flaws that make them interesting. If someone was amazingly nice, clever and good-looking they’d be really dull, wouldn’t they?!

The scene with Murphy the dog!

A friend bought my little girl a tub of chalks for her second birthday. We spent the afternoon drawing stick figures on the driveway. Later that night, I opened the door to be confronted by these weird chalk drawings everywhere. In the darkness, they suddenly looked incredible sinister! I called out to my partner: ‘These chalk men look really creepy in the dark . . .’

The book was originally called The Chalk Men. We changed it to The Chalk Man the day before submission!

Nope. I didn’t let anyone read the book before I submitted it to agents. My partner is quite critical and I was worried he’d crush my confidence before I started. Once I had an agent I let him read it. Fortunately, he liked it!

My agent submitted it on a Friday. By lunchtime on Monday we had a pre-emptive offer. More started to come in so the book went to auction. By Thursday I had a deal. It was the most exciting, terrifying, wonderful and surreal four days of my life!

Probably had a drink. That’s how it normally goes!

Well, book 2 is finished. it’s another dark, creepy thriller set in a former mining village in the North of England.

‘When Joe Thorne was fifteen his little sister, Annie disappeared. And then she came back. Twenty-five years later, in the same small village, an eleven-year-old boy is bludgeoned to death by his own mother.

Joe returns, to work as a teacher at the failing school, but also to find answers. But returning to the place where he grew up means facing the people he grew up with, the things they did and what they found . . .’

Anything I don’t have to cook.

The Lost Boys (and I have).

“‘Have you heard the joke about a man who walks into a bar with three ducks?

The man says: ‘But these are talking ducks!’

‘Right,’ says the barman and turns to the first duck. ‘Okay – what’s your name and what’ve you been up to today?’

The barman turns to the second duck and asks the same question.

The barman turns to the third duck. ‘So, if he’s Tom and he’s Dick, I suppose your name’s Harry.’

‘No,’ says the duck. ‘My name’s Puddles and I’ve had a bloody horrible day.’”

You can find out more about C. J. Tudor by visiting the website/social media sites below.

I would like to say a big thank you to C. J. Tudor for sharing with us details of her writing life, and for a wonderful interview.