The Writing Life of: Erin Casey

This week I am thrilled to be interviewing author Erin Casey. Erin will be sharing with us detail of her writing life, telling us all about her latest book ‘The Purple Door District‘, which was released on 15th December 2018 and answering a few fun questions too. This post contains affiliate links.

Erin Casey graduated from Cornell College in 2009 with degrees in English and Secondary Education. She attended the Denver Publishing Institute in 2009 and has been a recruiter ever since.

She is the Communications and Student Relationships Manager at The Iowa Writers’ House and one of two Directors of The Writers’ Rooms, a non-profit corporation that focuses on creating a free, safe environment for writers no matter their experience, gender, background, and income. Just like in her book, community is very important to her.

An advocate for mental health, Erin’s written and published several articles on the Mighty, specifically about anxiety and depression. She’s also a devoted bird mom. When not volunteering and working, she’s writing LGBT/urban/medieval YA fantasy and sharing her literary journey on Instagram and Twitter. One of these days, she might actually get some sleep.

I went through a mix of dream jobs when I was a kid. I wanted to be a baseball star for about a month, then I loved the idea of owning my own restaurant. I even created a diner in my room for my stuffed animals to enjoy, though I think I was a little morbid to have my stuffed lions dining on a zebra. I distinctly remember creating a little sign that read “Help” for the zebra to hold.

Susan Fletcher introduced me to my love for dragons. KA Applegate and the Animorphs series held my attention for years. She’s also the first author who made me throw a book at the end of the series. Eh hem, she most certainly wasn’t the last.

My absolute favorite story was Aunt Isabel Tells a Good One by Kate Duke. It’s about a mouse aunt who tells her niece a story about a young female mouse who has to save a prince. I’m pretty sure that’s what started my love for strong female characters.

I think I had an inkling here and there. I loved writing poetry whenever I had the chance. After reading Fletcher’s books, I scribbled down my own dragon story on notebook paper before and after school every day. I still have it tucked away in a Lisa Frank folder. But it was after I read Brian Jacques’ Redwall series that I knew I truly wanted to be a writer. His words and stories sang to me, and I wanted to follow in his footsteps.

Well, I work from 8:30-5 every day, and I volunteer for both The Writers’ Rooms and The Iowa Writers’ House, both literary organizations that help local writers. When I’m able to write, my peak hours are usually about 9pm until midnight. I try to make up for lost time on the weekend if I’m not working overtime or have a volunteer event. When NaNoWriMo comes around though, I’m scribbling every word I can throughout the day. I tend to bounce between working in my kitchen, my living room, and my office. My office aka aviary is my technical writing spot with my birds (more about them later!) 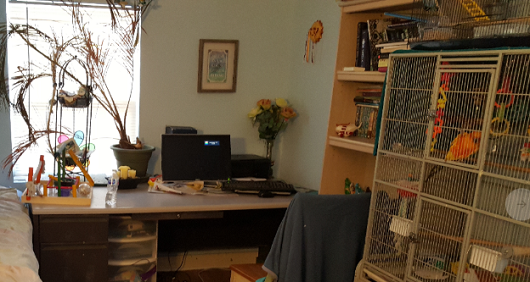 I’ve officially published one book so far called The Purple Door District. As for how many I’ve written…oh boy. You’re calling me out as a procrastinator, aren’t you? I have a YA LGBT dragon manuscript that’s out to publishers right now. I’m working on the sequel of The Purple Door District. I have a medieval fantasy trilogy that I need to edit. I also wrote four books about anthropomorphic wolves in a fantasy setting that I hope to one day rewrite. And fanfic…lots and lots of fanfic.

Oh, I’m very much a plantser. I’ll sit and plot out my book and know every chapter, and then my characters decide to drag me kicking and screaming down another path, hence the pantsing. That’s why the first book in my medieval fantasy trilogy ended at 250,000 words before I took the red pen to it.

Bianca was supposed to attend art school in Chicago, not run for her life from Hunters. The only chance she has to survive is to find The Purple Door District, a safe haven for a parahuman like herself. When she stumbles upon a magus named Gladus and a fellow avian named Carlos, she thinks she’s found safety. But the Hunters are relentless, as is the dark force driving them.

It’s up to the parahumans of the Purple Door District of Chicago to put their differences aside to save Bianca and stop a dark threat from destroying their peaceful community.

The Purple Door District is set in Chicago, so I had to do a lot of research about the area. I grew up near it, and I’ve been to Chicago many times, so I had a general idea of what it was like, but I wanted to know more about the restaurants and shops there.

Here’s an Easter egg for you. One of the vampire establishments is actually based on a real bar in Chicago. Research also included world building with my co-creator AE Kellar. We’ve spent years working on the main canon together. I just fell in love with the Purple Door District aspect of it and decided to talk about that world.

I think I developed the book for about a month before I started writing it during NaNoWriMo. So, plotting was in October, and I finished the first draft by the end of November 2017.

Since this is the beginning of the series, I wanted to just plainly title it The Purple Door District. The rest of the books will have that series title, but they’ll have their additional personal titles tacked on to it. PDD 2 is still a work in progress, though it’s tentatively named Wolf Pit.

The book is divided into various characters’ views, so you get an in-depth look into their different lives. My main character is Bianca, a young Latina werebird who’s just trying to find a safe haven after her family is killed. She spends much of the book trying to understand herself, her secret powers, and trying to find a family.

Gladus is a black water magus (magic user) who is the Violet Marshall, or head of the District. She’s a grandmotherly figure who takes parahumans under her wing, but she’s also not afraid to strike out with her magic to protect the people she cares about.

Trish is a Caucasian newbie vampire who’s struggling to fit in. She can’t seem to do anything right, and when she gets dragged into the world of the Hunters, things just go downhill for her. And then there’s Paytah, my Native American werewolf and alpha to the Chicago pack. He’s a grumpy old wolf, but when it comes to protecting the city, and Bianca, he has a heart of gold.

You mean besides wanting to throw my computer out the window? I decided to go the indie realm. AE Kellar and I decided that if we were going to publish these books, we wanted to have freedom to write them as we envisioned them. I learned a lot when I attended the Denver Publishing Institute, as well as from my fellow writers, so I thought indie would be a good route to take.

I found an editor named Leona Bushman to help me with my book. I got sensitivity readers for the diversity. I developed my own marketing plan and also created an Indiegogo campaign to help raise funds to publish. I also friended local and international artists who helped develop character art and swag for the book.

Ingramspark is my main publishing platform, and that’s made books available through a dozen venues. I sell through the venues, my website, through bookstores, and in person. I’m planning to travel to a lot of conventions next year.

Too many things to count! I’d like to finish PDD 2 and publish it in 2019. Kellar and I are working on the main canon and hope to have the first book in our Fates and Furies series published in 2019 or 2020. My YA LGBT dragon book will hopefully find an agent and home in 2019. And I’d very much like to go back to revising my medieval fantasy series and get that out there as well.

Teleportation. I’d love to be able to teleport to different countries like Wales and visit the castles. And it’d be nice to be able to visit my family.

I’m a crazy bird mom of seven feathered kids. I have two zebra finches named Zeus and Venus. Three ringed-neck doves named Luna, Apollo, and Nova. A turquoise green-cheek conure named Orion. A sun conure named Aladdin. Nova, Zeus, Venus, and I’d like to say Aladdin were all rescues. The previous trio was given up by former owners, and Aladdin was stuck at a pet shop for 10 months until I took him home. They’re my little muses, even if they can be bity!

Flaws and Feathers if I want to be creative. Anxiety’s Puppet if I’m being honest.

There’s a scene in my book where the characters meet at a parahuman market. I’d probably be one of the magus vendors there, likely selling magical tonics to help with anxiety and depression. As much as I love birds, I honestly think I’d be an earth magus with healing properties.

My bed! No, but really, I love Colorado. Excluding the high altitude, the place is absolutely beautiful, and I’ve had some of my best experiences there. Plus, Tattered Cover Bookstore is there.

“Oh good! You already have toys and food for me!”

I would like to say a big thank you to Erin Casey for sharing with us details of her writing life and for a wonderful interview.