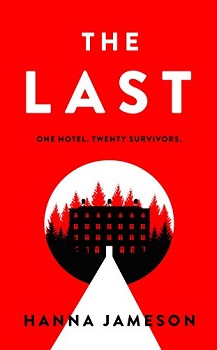 Historian Jon Keller is on a trip to Switzerland when the world ends. As the lights go out on civilisation, he wishes he had a way of knowing whether his wife, Nadia, and their two daughters are still alive. More than anything, Jon wishes he hadn’t ignored Nadia’s last message.

Twenty people remain in Jon’s hotel. Far from the nearest city and walled in by towering trees, they wait, they survive.

Then one day, the body of a young girl is found. It’s clear she has been murdered. Which means that someone in the hotel is a killer.

As paranoia descends, Jon decides to investigate. But how far is he willing to go in pursuit of justice? And what kind of justice can he hope for, when society as he knows it no longer exists?

Staying at L’Hotel Sixieme in Switzerland, having attended a conference, Jon wakes up one morning to find he has survived the end of the world; major countries and cities throughout have been victim to nuclear attacks. Stranded in the hotel with fear of what might await him outside, Jon starts to document the present events in the hope this will one day be read if they are rescued. A few days after the attacks, Jon finds the body of a young girl in one of the hotel’s water tanks and suspects there may be a killer within their group. We follow him as he investigates the death as well as try to outlast the nuclear devastation.

The Last is a day by day account of the happenings in the hotel through the eyes of Jon, our stories main character. There are a mixture of other characters; some quiet; some feisty and some with something to hide.

The way the story is written is clear and detailed and makes you feel like you are part of the journey. Seeing though the main characters eyes, I felt I could connect to him better as he reacted to situations like the majority of us would.

As the book progresses we start to learn the background to each of the survivors in the hopes of finding the young girl’s killer. It is interesting to learn about each character and how different their lives were from each other before the devastation and how they reacted to such events.

The hotel itself has a very similar history to that of the famous Cecil Hotel in America and due to this I sometimes found myself picturing this hotel instead which made it difficult for me to enjoy the location.

I thoroughly enjoyed the story and the build up was great but I felt like the reveal was rushed. I did not find myself with any unanswered questions but when reading, I felt like a lot of information had been thrown at me in one go, just to round off the story. This does not mean I would not like to read more of the authors books, the overall story was interesting and entertaining but due to the reveal I give the story 3.5 out of 5.

Hanna Jameson’s fourth novel, part murder mystery and part post-apocalyptic thriller – THE LAST – is out early 2019, with Viking UK and Simon & Schuster – Atria Books US. The Last is the story of an American academic searching for the truth about a girl who has been murdered in his Swiss hotel in the aftermath of a nuclear war that has destroyed most of the Western world.

Jameson had written the first draft of her debut, award-nominated novel – SOMETHING YOU ARE – at just seventeen. Something You Are and two further novels in the series – GIRL SEVEN and ROAD KILL – are available now in the UK, Germany, Japan, and the Netherlands.

She lives in London currently, and is working on screenwriting projects. She likes whiskey, history, and emotionally taxing TV shows.