The Body in the Boat by AJ MacKenzie – Book Review

The Body in the Boat by AJ MacKenzie – Book Review 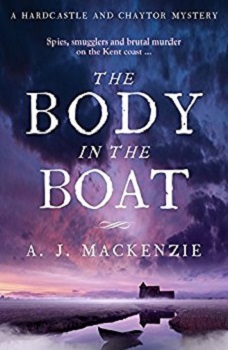 The Body in the Boat
Hardcastle and Chaytor Mysteries

A gripping tale of murder and mystery in eighteenth century England.

Across the still, dark English Channel come the smugglers. But tonight they carry an unusual cargo: a coffin. Several miles inland, a respected banker holds a birthday party for his wife. Within days, one of the guests is found shot dead.

What links this apparently senseless killing to the smugglers lurking in the mists? Why has the local bank been buying and hoarding gold? And who was in the mysterious coffin?

Reverend Hardcastle and Mrs Chaytor find themselves drawn into the worlds of high finance and organised crime in this dramatic and dark Georgian mystery. With its unique cast of characters and captivating amateur sleuths, The Body in the Boat is a twisting tale that vividly brings to life eighteenth-century Kent and draws readers into its pages.

Apart from a joyous six months in Cumbria I have lived all of my fairly long life within fifty miles of Romney Marsh yet until I read this book I had not realised how exciting a place it used to be.

The Body in the Boat is the third book published in the Hardcastle and Chaytor Mystery series. In it, A. J. Mackenzie describes a very different world to the relatively peaceful image that we tend to have of late 18th Century South East England. The action takes place during the French Revolutionary Wars when trade across the Channel was severely restricted and most goods were heavily taxed. Smuggling was not only rife but it also appears to have been accepted by most of the local population who preferred the term Free Trade. In those days the illegal cargoes were fine cloths and gold to France; wines, spirits and “vanities” into England.

From the opening pages the book has intense atmosphere. I loved the mood that was generated by the isolation of the marsh with its sparse population, declining harbours and its contrasts to the relatively prosperous surrounding higher ground. Mackenzie also provides excellent detail of banking at that time and of the judiciary prior to the police forces as we know them today.

The book has some excellent characters; Hardcastle who doubles as a parish priest and an investigating Justice of the Peace, Joshua Stemp as his Parish Constable and The Rider who appears in the latter stages of the book. My favourite was the gutsy widow Amelia Chaytor who I saw as an early Emma Peel; just replace the Lotus Elan with a one-horse, two seater gig.

The investigation leads up to a very lively climax. Could it have been better? If so, then not greatly. I have awarded The Body in the Boat four and a half stars.

A J Mackenzie is the pseudonym of Marilyn Livingstone and Morgen Witzel, an Anglo-Canadian husband-and-wife team of writers and historians.

They write non-fiction history and management books under their own names, but ‘become’ A J MacKenzie when writing fiction.

We have one paperback copy of ‘The Body in the Boat’ to giveaway. Open to UK Residents Only. Enter via Rafflecopter below.