The Writing Life of: Paul McCusker

This week on ‘The Writing Life of:‘ I am thrilled to be interviewing author Paul McCusker. Paul will be sharing with us detail of his writing life, telling us all about his latest book ‘The Body Under the Bridge‘, which was released on 20th November 2015 and answering a few fun questions too. This post contains affiliate links.

I wanted to be a writer going back as far as I can remember – not thinking of it as a career, but as something I really liked to do. Only later when I was headed for college and had to make career-type decisions did I begin to think of it with any intentionality.

First, I wrote as often – and in as many styles – as I could. I read a lot of novels, watched movies, went to plays, explored lyrics. Anything that inspired me. I grabbed opportunities to write whenever they came up.

I majored in Journalism in college, believing it was a sensible way to make writing a job. (I thought about English, but was afraid I’d become the cliched teacher with a manuscript sitting in my desk.)

Unlike a lot of writers who need to be locked away quiet somewhere, I enjoy writing in cafes. I enjoy the energy and stimulation of people around me going about their business.

Years ago, I did one or two manuscripts in long hand. I learned to type when I was 14, so I relied on typewriters mostly – until 1985 when I bought my first computer. Everything is written on computer now.

My favourite characters tend to be the ones I’m writing at the moment. Though, admittedly, I did a novel called “The Mill House” – where Father Gilbert appears as a cameo – and I enjoyed writing for those characters a lot.

I plot out the stories so I’ll know – and my publisher is assured – that I know what I’m doing. But the outline often changes as I write, because of problems I hadn’t anticipated or ideas that come up along the way. I never want the outline to dictate or limit where the story may go creatively. 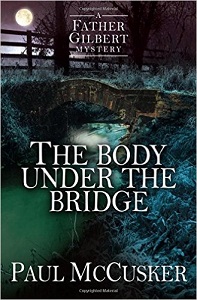 This one took a very long time. The impetus of the idea came in 1998 after reading an article in the London Times about an old bridge being discovered in a marsh-area that was being drained. I tucked it away until 2002 when I began to develop the idea for the audio dramas of the Father Gilbert Mysteries.

It seemed more like a novel than an audio drama, so it was put away again until 2010 when a publisher expressed interest in the concept.

I finished an early draft of it around then. Other projects got in the way until a couple of years ago when I finally got to work on it properly.

I don’t usually suffer from writer’s block, in the sense that I have an absence of ideas. My problem is having too many ideas and then trying to figure out which one to use.

With fiction, I sometimes struggle with deciding over first person or third person and establishing the narrative tone. That’s not so much writer’s block as it is indecision on my part. To break that, I step away from the project, read books I find inspirational, or watch movies that will re-set my thinking.

Father Louis Gilbert was originally called Father Martin Gilbert, but there’s a historian named Martin Gilbert and I thought he might take exception to a priest/detective bearing his name. Louis came along later as the first name.

I’d love to say I was really clever and give deep reasons behind the name but, frankly, I simply liked how it sounded. Some people later suggested that Louis is really “Lewis” – after CS Lewis – and Gilbert came from Gilbert Keith Chesterton. Maybe it was subconscious.

Adrian Plass voices Father Gilbert for the audio dramas, so it’s very hard to get him out of my head when I’m writing.

For screen, though, I would imagine someone like a younger Brendan Gleeson or Gabriel Byrne, though Father Gilbert isn’t Irish, or maybe Michael Fassbender, or a Paul McGann. My wife would like Tom Hiddleston or David Tennant or Jude Law.

My wife Elizabeth always looks over the manuscripts before they leave the house. She’s an excellent editor and proof-reader, asking the questions I’ve missed.

There are a couple of friends I sometimes ask, if there’s time. I rely on people to see what I don’t see, or to challenge any assumptions I’ve worked out in my head but may not work on the page.

I would like to say a big thank you to Paul for sharing with us details of her writing life, and for a wonderful interview.