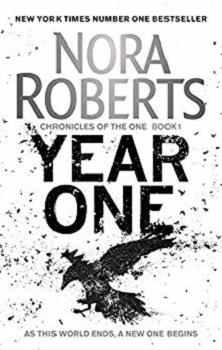 Year One
Chronicles of The One

As this world ends, a new one begins. An epic, apocalyptic tale of good and evil, love and loss.

With one drop of blood, the old world is gone for ever. And in its place, something extraordinary begins…

They call it The Doom – a deadly pandemic that starts on a cold New Year’s Eve in the Scottish countryside. There’s something mysterious about the virus and the way it spreads. As billions fall sick and die, some survivors find themselves invested with strange, unexpected abilities.

Lana, a New York chef, has the power to move things and people with her will. Fred can summon light in the darkness. Jonah, a paramedic, sees snatches of the future in those he touches. Katie gives birth to twins, and suspects that she has brought fresh magic into the world, along with new life.

But The Doom affects people differently. Along with the light, a dark and terrifying magic will also rise. As the remaining authorities round up the immune and the ‘Uncannies’ for testing, Lana, Katie and others flee New York in search of a safe haven. The old world is over, and Year One has begun.

I have had the pleasure of reading several books by author Nora Roberts and have thoroughly enjoyed every one of them and Year One is up with there with the best of them!

This is a tale of a killer virus which ends up killing 80% of the population of the world and those that are left alive are divided into two groups, GOOD and BAD!

The story starts with a few people who manage to escape the virus, leaving New York they set up home in a deserted town with just the basic amenities. Between scavenging and sharing resources they manage to survive until they’re attacked and the attackers seem to be targeting a couple particularly – Max and Lana. We also get to read about the Dark happenings and challenges they face.

Year One is a brilliantly written novel and Nora has good use of descriptive language throughout. I love the quote “He comes to pay tribute to The One and her mother. Her coming has been written, sung and foretold” made me think of the birth of Jesus and The visit of the magi.

The theme has plenty of intrigue, with twists, turns, and fantasy. A cataclysmic tale of death, destruction with love, goodness, and loss.

A very dark mood but is compensated with kindness and love. The characters are well formed which made them become very real and I love all the unexpected abilities some of them had. The ending wasn’t predictable which lead to my imagination and interest being held until the last pages.

I highly recommend Year One, thank you, Nora Roberts, for a very compelling read, look forward to reading more.

Nora Roberts was born in Silver Spring, Maryland, the youngest of five children. After a school career that included some time in Catholic school and the discipline of nuns, she married young and settled in Keedysville, Maryland.

She worked briefly as a legal secretary. After her sons were born she stayed home and tried every craft that came along. A blizzard in February 1979 forced her hand to try another creative outlet. She was snowed in with a three and six year old with no kindergarten respite in sight and a dwindling supply of chocolate.

Born into a family of readers, Nora had never known a time that she wasn’t reading or making up stories. During the now-famous blizzard, she pulled out a pencil and notebook and began to write down one of those stories. It was there that a career was born. Several manuscripts and rejections later, her first book, Irish Thoroughbred, was published by Silhouette in 1981.

Nora is a member of several writers groups and has won countless awards from her colleagues and the publishing industry. Recently The New Yorker called her “America’s favorite novelist.”