A Cut for a Cut by Carol Wyer – Book Review

A Cut for a Cut by Carol Wyer – Book Review 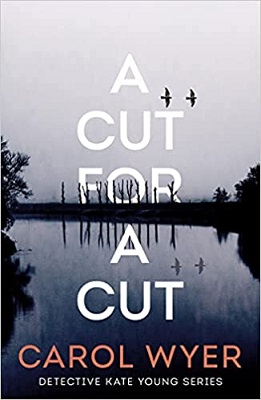 A Cut for a Cut
Detective Kate Young Book Two

DI Kate Young can’t trust anybody. Not even herself.

In the bleak countryside around Blithfield Reservoir, a serial murderer and rapist is leaving a trail of bloodshed. His savage calling card: the word ‘MINE’ carved into each of his victims.

DI Kate Young struggles to get the case moving―even when one of the team’s own investigators is found dead in a dumpster. But Kate is battling her own demons. Obsessed with exposing Superintendent John Dickson and convinced there’s a conspiracy running deep in the force, she no longer knows who to trust. Kate’s crusade has already cost her dearly. What will she lose next?

When her stepsister spills a long-buried secret, Kate realises she’s found the missing link―now she must prove it before the killer strikes again. With enemies closing in on all sides, she’s prepared to do whatever it takes to bring them down. But time is running out, and Kate’s past has pushed her to the very edge. Can she stop herself from falling?

When you pick up a crime thriller and see it’s written by Carol Wyer, you know you’re in safe hands and this book just reinforces that knowledge.

At the heart of the DI Kate Young series is a conspiracy, senior police officials are involved in a sex trafficking ring and are responsible for the deaths and disappearances of people who get too close to uncovering the truth, Kate knows this as her journalist husband was killed last year while he was secretly investigating these people. This narrative thread is continued in this story, though it takes something of a backburner to the active case that Kate and her team are working on.

Women are being targeted by an incredibly violent serial rapist and it’s a race against time to stop him. Rather than the reader knowing who is responsible, we are forced to feel the frustrations of the investigation as it moves at a maddeningly slow pace – these things take time and leads have to be followed up, even if they come to nothing. But when DI Young’s memory is sparked by something the perpetrator says, she realises that this isn’t the first time she’s come across this guy.

The characters in this book are all incredibly complex and well written, they’re all becoming better acquainted and the dynamic is an interesting one – the team don’t all like each other (which colleagues often don’t!) and Kate, as their supervisor, has to try to keep them all in line.

Her character is particularly interesting, she’s starting to come out of the haze of grief after the loss of her husband and see things around her more clearly. The realistic part here is that the grief keeps washing over her in waves, even though it’s not as bad as it was before – then the guilt about not feeling the grief starts to kick in.

I love this series and its characters, the complexity of plot and personalities always come to mind when I think about this author.

USA Today bestselling author and winner of The People’s Book Prize Award, Carol Wyer’s crime novels have sold over 800,000 copies and been translated into nine languages.

A move from humour to the ‘dark side’ in 2017, saw the introduction of popular DI Robyn Carter in Little Girl Lost and proved that Carol had found her true niche.

February 2021 saw the release of the first in the much-anticipated new series, featuring DI Kate Young. An Eye For An Eye was chosen as a Kindle First Reads and became the #1 bestselling book on Amazon UK and Amazon Australia. The second book, A Cut For A Cut, was released on June 29th.

Carol has had articles published in national magazines ‘Woman’s Weekly’, featured in ‘Take A Break’, ‘Choice’, ‘Yours’ and ‘Woman’s Own’ magazines and the Huffington Post. She’s also been interviewed on numerous radio shows discussing ‘Irritable Male Syndrome’ and ‘Ageing Disgracefully’ and on BBC Breakfast television.

She currently lives on a windy hill in rural Staffordshire with her husband Mr. Grumpy… who is very, very grumpy.

When she is not plotting devious murders, she can be found performing her comedy routine, Smile While You Still Have Teeth.

What did you think of ‘A Cut for a Cut’? Share your thoughts in the comment section below!