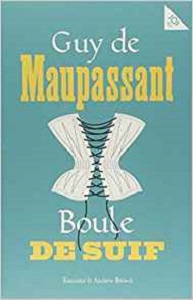 A carriage transporting ten passengers fleeing from Rouen is stopped at a village inn by Prussian soldiers, who decide to detain them until one of their party, the prostitute Boule de Suif, consents to sleep with their officer.

When Boule de Suif refuses to do so on account of her principles and patriotic sentiments, the solidarity initially manifested by her fellow travellers becomes increasingly tested as the deadlock continues, and the strained relationship between her and her “respectable” counterparts gradually worsens.

A scathing satire of bourgeois prejudice and hypocrisy and a compelling snapshot of France during the 1870 Franco-Prussian War, `Boule de Suif’ – here presented with five other major stories on the lives of prostitutei – was declared a masterpiece by Flaubert and is widely considered to be Maupassant’s finest short story.

This volume is part of Alma Classics’ 101 pages collection. There are six short stories of which Boule de Suif fills half of the book at 51 pages. They have been translated by Andrew Brown and first published as a collection in 2003. The 2018 package includes an introduction by Brown which is useful reading for the background that it provides.

The stories are set in France around the time of the Franco-Prussian war of 1870-71 which resulted in a heavy defeat for France. Paris surrendered after a siege followed by street warfare between French forces and revolutionary militia.

Boule de Suif is a great little study of French society and moral attitudes at that time. Indeed, given the group’s situation, I could well imagine that such a chain of events could still happen today. Guy de Maupassant observes how people who would not mix socially can unite in times of trouble. Most of the coach party consider themselves vastly superior to the prostitute but they are delighted to take advantage of her generosity and her professional skills to relieve their situation. Are they grateful to her? You will need to read the book to find the answer.

Incidentally I am pleased that Andrew Brown kept the French title; Boule de Suif is vastly preferable to any English translation.

The other five stories in this volume all have their titles translated and all have merit. They also follow de Maupassant’s predilection for relationships between the classes. Bed 29 has a serious theme but is very funny with much of the humour aimed at the French Army Officer. I also loved the atmosphere and the messages in The Confession and Rose.

Boule de Suif is an entertaining little volume which will inform and amuse. Of course, with only 114 pages including the Introduction and Notes pages your entertainment will be relatively brief. I have awarded four stars.

Henri René Albert Guy de Maupassant (5 August 1850 – 6 July 1893) was a French writer, remembered as a master of the short story form, and as a representative of the naturalist school of writers, who depicted human lives and destinies and social forces in disillusioned and often pessimistic terms.