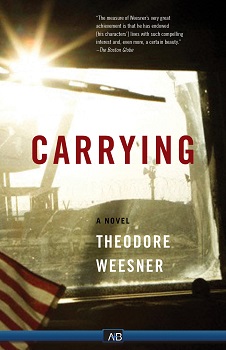 Carrying symbolizes both the knife hidden in the boot of a military recruit, and the burden of history. With unapologetic candor Weesner navigates literary cherry bombs surrounding the subject of evolving race and class relations in America today.

With exquisite aptitude, a mentorship between blue collar Professor Herman Roth and his Southie protege Jimmy Murphy reveals a universal human conflict, that of personal-best versus the other.

Set in New England and overseas military zones, the narrative alternates between the quotidian of Professor Roth’s existence and hope for love, and Murphy’s letters chronicling keen observations during his life in the military.

Carrying follows the life of Jimmy Murphy, from South Boston, as told by his ex-teacher and friend Herman Roth.

The plot follows Jimmy’s life from a young 14 year old to an amateur boxer, through to a serving soldier deployed to the Gulf War. It then follows his life outside of the army, after serving for his country.

I must say straight off that I had quite a hard time reading this book. I really wanted to love it as the Gulf War was something that I studied and was interested in. I kept journals of events and newspaper cuttings, etc, so it was a war I knew a thing or two about.

However, I found the book hard to swallow. There was a lot of racial and expletive language, and also a few words that when translated into British English had a completely different meaning, which took some getting used to.

The book opens quite slowly, building up to the war, and I felt like it dragged on for a little too long. The part where Jimmy served in the Gulf War was the most interesting and was quite action packed.

Unfortunately, I didn’t connect with the characters in Carrying, and I feel that this is one of the reasons that I found the book hard to read.

I’m sorry to say that this book really wasn’t something I could get my teeth into, even though I really wanted to. In the right hands this book could be a five star rating. For me, I’m afraid it is only three stars.