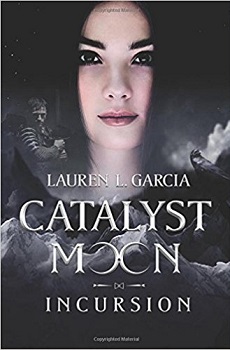 Kali and Stonewall have to find a way to work together in order to survive, but she’s a mage and he’s taken an oath to protect the world from magic.

Magic is new to the country of Aredia. Mages are enslaved for their abilities, locked behind high walls and guarded by sentinels – elite warriors with an unnatural immunity to magic.

Kali, a crippled mage who longs to escape her painful past, travels to meet a powerful healer in Whitewater City. But on the way her sentinel escort is decimated by monstrous raiders, leaving her with a single guardian, Stonewall: a sentinel with nothing but his chosen name and his faith in the gods. Together, Kali and Stonewall must learn to work together to survive a harrowing journey while demonic creatures from the north invade their lands.

Meanwhile, the mages and sentinels of Whitewater City are drawing battle lines and preparing for war – against one another.

What will await them should they ever reach their destination?

– Above all other things, this is a story about love –

Ms. Garcia spins a tale of the Sentinels sworn to protect the world from the Mages. Kept in city’s locked away from the world Mages are feared, despised. As a Sentinel and Mage head to their destination eyes are opened truths are seen and problems old and new are shown in a new light. Their adventures are eye opening for both of them. As they face the world, an unlikely love unfolds. The thing I loved most about their relationship was it came naturally.

“Kali’s breath came shorter as her heartbeat quickened and her gaze was drawn to the stubble on his cheeks and chin, the curve of his mouth, the dark, fine fringe of his hair… “

The secondary character’s stories are told revolving around the same events, sometimes at different timings but slowly they start to come together. With Milo telling the side of twins who are just climbing the ranks of the sentinels. Eris and Gideon Eshina a married Mage couple who have had enough. Commander Talon a hard core Sentinel. The lastly the first Mage who has a story we have yet to discover.

Then there are the Sufani whom abhor the Sentinels, because they too are rejected by the rest of the world. Yet they hate the Mages too.

“Why do you poison your body and sentence yourself to an unnaturally short life, just so you can resist the effects of a magic-user?” “Because my life is not as important as those I serve,” Stonewall shot back, even as his hand crept to one of the pouches at his belt. “Someone has to protect the world against magic. There must be balance.” “There must also be tolerance,” Leal said. “Some beliefs are strong enough to dictate extreme action. It is not your place to judge us, Sentinel, just as we should not judge you. Isn’t that what the One teaches?”

With five different POV’s most authors have a difficult time truly capturing every side of the story. Ms. Garcia managed this with ease. It took me a few pages to get into the story but, once I was in I didn’t leave until I finished.

There were a few questions left unanswered which left me hanging, but I felt as if the author wanted us to discover them along with the characters. The unanswered questions created plot holes leaving you scrambling to understand what was going on.

Overall this has been one of the best books I’ve in a while. Everything from the characters to the world itself makes you want to know more. With every twist and turn we learn something new of this amazing new world. You journey with every character discovering their flaws and strengths. The many races of humans the segregation and prejudice is one of the biggest plot point.

I can’t wait to see where the author goes with it. I can see now that this is a series I will follow to the end. Would I recommend this book? Yes to anyone who enjoys fantasy and new worlds. Besides I have a feeling the story gets better. Can’t wait for the next book!

I’ve has been a storyteller all my life. I started writing down my stories at the age of twelve; two decades and over two million words later, I’m still going. My writing process often begins with a question: what if? Hot on the heels of those two words, other questions like “how?” and “why?” will follow. Inspiration comes from everywhere, though music compels my muse like nothing else. Sometimes a song will strike me, and I won’t know why until I’m working on a particular character or scene; then, everything will crystallize in my mind. “Of course! This is how it should go.”

My work is extremely character-driven; they are the heart and soul of my stories, and much of my story crafting is centered around them. As a matter of fact, In addition to Incursion and its subsequent stories, (tentatively titled Breach, Storm, and Surrender), I have about four or five other stories outlined, taking place at various points in the world’s history, with more ideas in the awnings. My hope is to create a fantasy world of dazzling breadth, so stick around. The fun is just beginning. 🙂

In addition to living in various fantasy worlds of my own making, I earned a BA in English Literature and married my high school sweetheart. I live in North Florida with my husband, and enjoy hiking, weightlifting, kayaking, looking at pictures of food, and dancing at music festivals.