Once upon a time, our forefathers earned calluses on their thumbs and index fingers to produce prospective masterpieces. In shaky script, some writings could not be deciphered, most were never read or even found, but a few manuscripts survived prehistory and beyond to influence international cultural developments. Writing was very hard work, likely scorned by those who harvested grains, fruits, and hunted to feed their families, the black sheep of which were the “authors” – the equivalent of the “food stamp recipients” of their times.

Today, word processing programs pump out manuscripts resulting in 5,000 books being published each day, one million a year. With respect to the visibility of these books to readers, while masterpieces are likely in the mix, most might as well have been pictures on the walls of caves.

I didn’t want to become a cave man. I approached the writing of my debut novel, Rarity from the Hollow, with consideration about popularity of books by genre. But, something more important than becoming an author compelled me – it was the cause – to contribute to the prevention of child abuse. As I wrote, the genres bent and literary content seeped into popular genre. When published, nobody accused my novel of being another cookie-cutter clone.

“…soon I found myself immersed in the bizarre world… weeping for the victim and standing up to the oppressor…solace and healing in the power of love, laughing at the often comical thoughts… marveling at ancient alien encounters… As a rape survivor… found myself relating easily to Lacy Dawn… style of writing which I would describe as beautifully honest. Rarity from the Hollow is different from anything I have ever read, and in today’s world of cookie-cutter cloned books, that’s pretty refreshing… whimsical and endearing world of Appalachia n Science Fiction, taking you on a wild ride you won’t soon forget….” www.kyliejude.com

One book reviewer even called the first edition of Rarity from the Hollow a masterpiece: “Rarity from the Hollow by Robert Eggleton is a masterpiece! The author has to be given credit for his admirable imaginative skills. This unusual ‘science fiction’ novel doesn’t conveniently fit into a suitable sub-genre, with elements of fantasy, adventure, unique love story and social issues….” www.amazon.com

Yet, the most beautiful cave drawing doesn’t help one maltreated child. I’m a retired children’s psychotherapist with over forty years in the field of children’s advocacy. Helping kids was the point of my retirement to write fiction, to raise fund in an impoverished state with struggling nonprofit agencies like the one that I used to work at in the early ‘80s. Half of author proceeds from Rarity from the Hollow have been and will continue to be donated to Children’s Home Society of WV. www.childhswx.org

Drawing on the walls of caves may not be such a hopeless activity after all. Maybe my work will get more attention if I post it on social media. 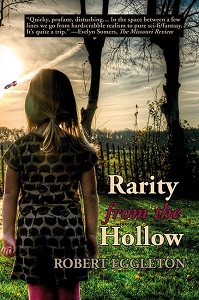 Lacy Dawn is a true daughter of Appalachia, and then some. She lives in a hollow with her worn-out mom, her Iraq War disabled dad, and her mutt Brownie, a dog who’s becoming very skilled at laying fiber optic cable.

Lacy Dawn’s android boyfriend has come to the hollow with a mission. His equipment includes infomercial videos of Earth’s earliest proto-humans from millennia ago. He was sent by the Manager of the Mall on planet Shptiludrp (Shop ’till You Drop): he must recruit Lacy Dawn to save the Universe in exchange for the designation of Earth as a planet which is eligible for continued existence within a universal economic structure that exploits underdeveloped planets for their mineral content.

Lacy Dawn’s magic enables her to save the universe, Earth, and, most importantly, her own family.

Excerpt – From chapter 13, Mom I’d Like to Introduce You to My Fiancé:

…..…Jenny (the mother) walked up the hill to Roundabend. She called Lacy Dawn’s name every few yards. Her muddy tennis shoes slipped and slid.
I hear her voice. Why won’t she answer me?
“Sounds like she’s talking to someone,” Jenny said to the Woods.
Nobody responded. The trees weren’t supposed to since Jenny was no longer a child. Her former best friends had made no long-term commitment beyond childhood victimization. They had not agreed to help her deal with domestic violence in adulthood. She hugged the closest tree.
I will always love you guys.
Jenny quickened her pace, stopped, and listened for human voices. A few yards later, she stopped again.
Now it sounds like she’s behind me instead of in front.
Jenny looked to the left of the path.
There ain’t no cave Roundabend, but there it is.
She walked toward the entrance. The voices grew louder and she looked inside. Lacy Dawn sat on a bright orange recliner. Tears streamed down her face. Jenny ran to her daughter through a cave that didn’t exit and into a blue light that did.
“All right, you mother f**ker!”
“Mom!” Lacy Dawn yelled. “You didn’t say, ‘It’s me’ like you’re supposed to (a traditional announcement mentioned earlier in the story).”
DotCom (the android) sat naked in a lotus position on the floor in front of the recliner. Jenny covered Lacy Dawn with her body and glared at him.
“Grrrrr,” emanated from Jenny. It was a sound similar to the one that Brownie (Lacy Dawn’s dog) made the entire time the food stamp woman was at their house. It was a sound that filled the atmosphere with hate. No one moved. The spaceship’s door slid shut.
“Mommmmmy, I can’t breathe. Get up.”
“You make one move you sonofabitch and I’ll tear your heart out,” Jenny repositioned to take her weight off Lacy Dawn.
Stay between them.
“Mommy, he’s my friend. More than my friend, we’re going to get married when I’m old enough — like when I turn fourteen. He’s my boyfriend — what you call it — my fiancé.”
“You been messin’ with my little girl you pervert!” Jenny readied to pounce.
“MOM! Take a chill pill! He ain’t been messing with me. He’s a good person, or whatever. Anyway, he’s not a pervert. You need to just calm down and get off me.”
Jenny stood up. DotCom stood up. Jenny’s jaw dropped.
He ain’t got no private parts, not even a little bump.
“DotCom, I’d like to introduce you to my mommy, Mrs. Jenny Hickman. Mommy, I’d like to introduce you to my fiancé, DotCom.”
Jenny sat down on the recliner. Her face was less than a foot from DotCom’s crotch and she stared straight at it. It was smooth, hairless, and odor free.
“Mrs. Hickman, I apologize for any inconvenience that this misunderstanding has caused. It is very nice to meet you after having heard so much. You arrived earlier than expected. I did not have time to properly prepare and receive. Again, I apologize.”
I will need much more training if I’m ever assigned to a more formal setting than a cave, such as to the United Nations.
“Come on, Mommy. Give him a hug or something.”

Robert Eggleton has served as a children’s advocate in an impoverished state for over forty years. He is best known for his investigative reports about children’s programs, most of which were published by the West Virginia Supreme Court where he worked from 1982 through 1997, and which also included publication of models of serving disadvantaged and homeless children in the community instead of in large institutions, research into foster care drift involving children bouncing from one home to the next — never finding a permanent loving family, and statistical reports on the occurrence and correlates of child abuse and delinquency.

Today, he is a recently retired children’s psychotherapist from the mental health center in Charleston, West Virginia, where he specialized in helping victims cope with and overcome physical and sexual abuse, and other mental health concerns. Rarity from the Hollow is his debut novel. Its release followed publication of three short Lacy Dawn Adventures in magazines: Wingspan Quarterly, Beyond Centauri, and Atomjack Science Fiction. The second edition of Rarity from the Hollow was release on November 3, 2016.

Author proceeds have been donated to a child abuse prevention program operated by Children’s Home Society of West Virginia. www.childhswv.org Robert continues to write fiction with new adventures based on a protagonist that is a composite character of children that he met when delivering group therapy services. The overall theme of his stories remains victimization to empowerment.