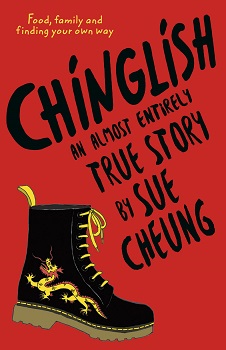 It is difficult trying to talk in our family cos:
a) Grandparents don t speak English at all
b) Mum hardly speaks any English
c) Me, Bonny and Simon hardly speak Chinese
d) Dad speaks Chinese and good English but doesn’t like talking
In other words, we all have to cobble together tiny bits of English and Chinese into a rubbish new language I call ‘Chinglish’. It is very awkward.

Jo Kwan is a teenager growing up in 1980s Coventry with her annoying little sister, too-cool older brother, a series of very unlucky pets and utterly bonkers parents. But unlike the other kids at her new school or her posh cousins, Jo lives above her parents’ Chinese takeaway. And things can be tough whether it’s unruly customers or the snotty popular girls who bully Jo for being different. Even when she does find a BFF who actually likes Jo for herself, she still has to contend with her erratic dad’s behaviour. All Jo dreams of is breaking free and forging a career as an artist.

Told in diary entries and doodles, Jo’s brilliantly funny observations about life, family and char siu make for a searingly honest portrayal of life on the other side of the takeaway counter.

1984, thirteen-year-old Jo Kwan’s parents have bought a Chinese takeaway in Coventry, meaning that she no longer has to reside above the horrid butcher’s shop in Hull and that she will now be living in the same city as her older brother, who lives with their Grandparents.

Unfortunately, things don’t go quite according to plan. The shop is only small which means the accommodation above is tiny too, just two-bedrooms and no living-room. This is not good, she now will have to share a bedroom with her little sister Bonny who is a real hand full.

With Grandparents who don’t speak any English, a Mother who barely speaks English, a Father who just doesn’t speak and Jo and her siblings not being able to speak Chinese this is the start of the wild, unpredictable and often hilarious goings-on in Jo’s life.

Having lived through the 80s, although a lot younger than Jo, I turned seven towards the end of 1984, this book brought back lots of memories of the era. It was a wonderful look at life through the eyes of Jo and her family. With pop stars, music, TV shows, radio shows, magazines, and movies all getting a mention it was hard not to feel nostalgic.

The book is told in diary format as Jo decided she was going to document all the good and hilarious things that happened in her life, although a few not so funny moments are recorded too including racism, bullying, and child abuse. As well as these topics she also wrote the usual diary entries from girls her age, clothes, body problems, friends and money issues.

From hoovering up hamsters to having a goat as a lawnmower it’s not only humans who make it into her story. Along with Jo’s family, her neighbours, school friends, and customers also get discussed in her diary too.

The book sees Jo grow and how her life changes as it spans four years of her life. It was enjoyable, poignant, and often had laugh-out-loud moments surrounded by the realism of what Jo’s teenage life was like as a Chinese girl living in a mainly white society.

There are amazing and very funny illustrations throughout the book and they really do bring Jo’s past to life. The book does carry an important message for teenagers though, about being yourself, following your dreams and never giving up.

The story was enjoyable the whole way through mainly down to not only the context of Jo’s diary but how connective and touching author Sue Cheung’s words felt.

Sue Cheung was born in the Midlands and spent her early years clowning about and busily scribbling and drawing. At the age of 16 she seized her chance to become an artist by winning a scholarship to the London College of Fashion. Later, Sue went into advertising and worked her way up to Art Director.

She now freelances as a designer from her home in Bournemouth, where she writes and illustrates children’s books. She also writes under the name of Sue Pickford.