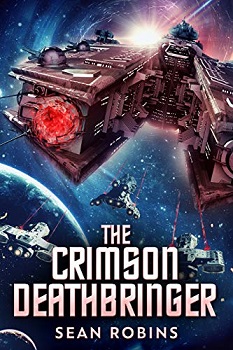 The Akakies, a peaceful, technologically advanced alien species known as “the galaxy’s pranksters,” are under attack by the Xortaags, a vicious military race bent on conquering the universe. The Xortaags are deadly, but Tarq, the Akakies’ chief strategist and legendary shadow master, has a plan.

Meanwhile on Earth, Jim, a wise-cracking, movie-quoting, OCD-suffering fighter pilot, is about to propose to his girlfriend Liz when his childhood friend Kurt shows up at his house, injured and covered in blood. Kurt is a freedom fighter/super- assassin hunted by a brutal military dictatorship’s security forces. Soon after, Jim, Liz and Kurt’s lives are set to crash with a galactic war that threatens the very existence of the human race.

Can our heroes save humanity from the wrath of an overwhelming enemy?

The universe Robins creates is compelling. The premise is strong: a dictator rules Earth until it comes under attack by an alien force. Yet, the explanation for how Earth became a dictatorship is drastically simple, and there is no attempt to explain (even with pseudo-science) the alien technology. Detailed background on the alien societies was also sorely lacking.

Switches in perspective contribute to an inconsistent tone. On one page the world is being destroyed and on the next, the characters hang around doing nothing for months. It’s unfortunate because the carnage and emotional resonance of the attack scenes are very well done, but are neutered by trivial humour and a dragging timeline. If the novel had tightened the time spent at the military base, or if the jokes had been minimized, the tension would have been achieved.

Related to the humour, the allusions and references to other sci-fi were too heavy-handed and repetitive to be funny. One example is the main character having a conscience he calls “Venom”. This allusion has nothing to do with the plot, nor does it advance our understanding of Jim. And while Jim’s quips were occasionally amusing, often Robbins references a movie/show instead of describing a situation. While I understood the mentions, because I’m a huge sci-fi nerd, it just didn’t feel right to me.

The minor characters kept me reading. Kurt, Allan and Keiko were typical space opera soldiers, but I enjoyed their stories. Jim, on the other hand, is hard to like. He’s chauvinistic, arrogant, annoying, and makes offensive comments/jokes. His girlfriend Liz is a manic dream girl – her primary traits are that she’s very attractive and has a temper. We learn nothing about her other than when she spends time with Jim. I can’t be too harsh on Liz, as none of the characters are very complex, but I didn’t care about their relationship.

The antagonist, Maada, is one of the more complicated characters. If we had been introduced to him earlier it may have resurrected the tension.

The novel reads as a fan-fiction of the genre without contributing anything new to it, but the battle scenes are well-wrought and exciting.

Well, not really, but this should tell you all you need to know about me and my writing style.

I’m a huge Marvel (plus Game of Thrones, Star Trek AND Star Wars) fan, which shows since my novel is loaded with pop culture references. If you are a sci-fi fan (I assume that you are, otherwise what are you doing here?) you will enjoy them tremendously. I even went full Deadpool in my first draft and broke the fourth wall multiple times, until my editor told it was distracting and kept taking her out of the moment. Shame. Those fourth-wall breaks were hilarious. Still, I can guarantee a few laugh-out-loud moments.

Case in point: The “good” aliens in my novel are a race of pranksters, whose main goal in life is pulling other people’s legs (They have four legs, hence the slight change in the idiom). My favorite author is Jim Butcher (The Dresden Files), which is probably how I ended up writing in a first-person POV with the same light-hearted, funny tone as he does. The fact that my MC’s name is Jim is purely coincidental though.

I am a university/college level English teacher, and including Canada, I have lived and worked in five different countries. I have met people from all around the world. Plus, my parents are from a different background, and so is my wife. As a result, diversity has become a major theme in my novel. My characters look like the bridge crew from Star Trek. One of my female characters even impersonated Uhura once, albeit posthumously.

I hope you enjoy reading The Crimson Deathbringer as much as I enjoyed writing it.

You can read excerpts from this book on my blog at , and you can follow me at twitter.com/seanrobins300 or .