Death of a Lie by Peter Harper – Promo Post

Death of a Lie by Peter Harper – Promo Post

Sponsored Post. Today we welcome author Peter Harper to Whispering Stories with his Promotional Post for his new book ‘Death of a Lie‘, which was released on 21st August 2019.

1944, and a Lend-Lease B-25 with its Soviet aircrew falls from the sky above Timişoara, Romania. Andrei Bălcescu, while camping out that night on his father’s smallholding, finds a battered folder amidst the plane’s wreckage. Fifty years later, Andrei’s adopted son, Lucian, rediscovers the folder and its eight pages of encrypted material in a garden shed. He visits a childhood friend, who makes a start on cracking the code. Barely a week later, Lucian suspects he is being followed by persons unknown.

Present day, and Lucian’s daughter, Shani Bălcescu, a promising Oxford academic, continues to search for information on her family. When she receives a text from an individual claiming to have known her parents, curiosity takes her to Timişoara, where she soon regrets her impulsive nature. Witness to the aftermath of a vicious murder, and hearing that both Oxford and her home city of Prague have been ‘visited’, Shani knows that to leave Romania would prove fatal without first piecing together her father’s movements days before she was born.

– This is an epic journey, full of many dangers and pitfalls which is exciting and nail biting. (5 Stars)

Lucian looked at Serghei and saw the bewilderment in his eyes, too. They both turned back to Mario. ‘Go on,’ said Lucian.
‘The Soviet Union was handed the atomic bomb by the Yanks, or more precisely by a powerful underground faction operating inside America. Maybe Kennedy was about to expose the fact that the Cold War was a hoax. A complete set-up.’
‘That doesn’t make any sense at all,’ said Lucian, annoyed now that his time was being wasted because the man was talking garbage. ‘I mean the Cold War being a hoax.’
‘Listen to me…’ Mario took a long cigarette from its elegant, gold-striped packet – utterly incongruous with its surroundings – and lit up. ‘When I was in Hotel Sewer in Bucharest, I met a guy who told me a lot about this stuff. It makes sense if there’s a body of people – like really wealthy people – who are set on organising massive upheavals, and out of them they build a world government while the ordinary governments show themselves to be useless against what’s being thrown at them. That’s what this guy told me, and since that day every question I’ve put to myself always points to exactly that…’

Death of a Lie is FREE on Amazon between the 10th and 12th October, so grab a copy quick! 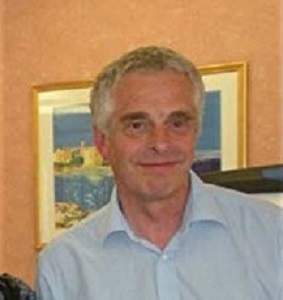 Peter Harper works mainly as a member of staff at a post-graduate college in Oxford, UK. He became captivated by creative writing while toying with a short story, using the first person. He quickly realised, however, that he was more suited to the third person, particularly when it came to the project he had in mind, a character-driven story with topical global themes, which would nonetheless slot into the thriller genre – the novel in question being Cascade, the prequel to Death of a Lie.