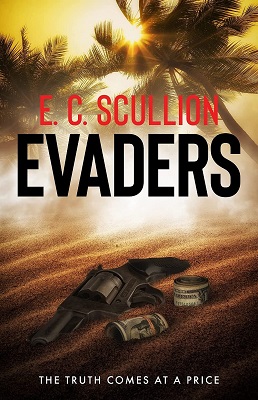 A crime has been uncovered. Clare Buchanan has been missing for almost twelve years.

Former security manager Tom Holt knows that the man responsible for her disappearance goes by the name of Capricorn.

On the run in South America, Holt’s life is in danger.

In London, journalist Nash Akinyemi discovers the story that could make her career; a chance to finally step out of her mother’s shadow.

Together, Holt, Nash and Becca must risk everything to expose Capricorn’s secrets to the world. Yet Capricorn has his own weapon. Anton Merrick has a dark past, and he will stop at nothing to keep them all silent…

From the streets of London, to the shores of Chile, to the tropical islands of Panama, the race is on to expose the truth, before the truth gets buried. The second novel from the author of the bestselling Intruders.

Evaders is the sequel to Intruders, which was released in June 2020. The plot begins right where the first book ended and they need to be read in order for you to understand what is happening.

In Intruders, we met Tom Holt an ex-security consultant who took on a job for someone called ‘Capricorn’ in South America. A team of ‘experts’ had been put together to crack a safe in a gated community and recover the contents.

In Evaders Tom Holt is now on the run and some of the team from the job are dead. Tom decided the contents from the safe were too precious and the truth needed to be outed. He sent copies of what was in it to a detective and a journalist.

The detective is on Capricorns payroll but Journalist Nash Akinyemi definitely isn’t and she knows that outing this information will see her career take off. Together, Tom, Nash, and thief Becca, who was part of the team in Intruders, but worked for Capricorn, are joining forces to get more evidence and make the information public.

Evaders is a full-on fast-paced thriller that has action on every page. We move from country to country as the trio tries to keep one step ahead of Capricorn and his henchman. The plot is fascinating and kept me interested the whole way through. It was good to be back in the company of Tom Holt who had made some bad choices in his life which is how he ended up in South America running for his life.

I loved the combination of the trio. The banter and the attention to detail. They each brought something to the story, though they fitted together perfectly. You get the sense of having to look over your shoulder at every stage, which left you with that ‘edge of your seat’ feeling. This is an amazing series that you need to read.

E.C. Scullion is British Author. Emma joined the Foreign & Commonwealth Office in 2003. For the past eleven years she has managed to escape Westminster, working in British Embassies in Beijing, Bangkok, Panama City and Montevideo in Uruguay. She is a graduate of the Faber Academy and INTRUDERS – part one in the Tom Holt trilogy – is her first published novel. She now lives in Rome with her husband and two children.

EVADERS, the sequel to INTRUDERS and part two of the trilogy, will be released in August 2021.