Based on the Marvel comic book character, Black Panther by Stan Lee and Jack Kirby

Marvel Studios’ ‘Black Panther’ follows T’Challa who, after the events of ‘Captain America: Civil War,’ returns home to the isolated, technologically advanced African nation of Wakanda to take his place as King.

However, when an old enemy reappears on the radar, T’Challa’s mettle as King and Black Panther is tested when he is drawn into a conflict that puts the entire fate of Wakanda and the world at risk.

Based on the book of the same name by E.L. James 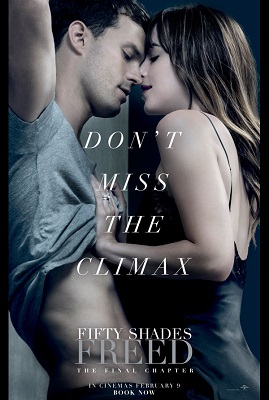 Now, Ana and Christian have it all – love, passion, intimacy, wealth, and a world of possibilities for their future. But Ana knows that loving her Fifty Shades will not be easy, and that being together will pose challenges that neither of them would anticipate. Ana must somehow learn to share Christian’s opulent lifestyle without sacrificing her own identity. And Christian must overcome his compulsion to control as he wrestles with the demons of a tormented past.

Just when it seems that their strength together will eclipse any obstacle, misfortune, malice, and fate conspire to make Ana’s deepest fears turn to reality.

Based on the book of the same name by Anthony Sadler,‎ Alek Skarlatos,‎ Spencer Stone, & Jeffrey Stern 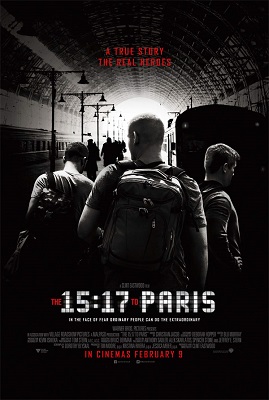 The 15:17 to Paris is the amazing true story of friendship and bravery, and of near tragedy averted by three heroic young men who found the unity and strength inside themselves when they – and 500 other innocent travellers – needed it most.

On 21st August 2015, Ayoub El-Khazzani boarded train #9364 in Brussels, bound for Paris. There could be no doubt about his mission: he had an AK-47, a pistol, a box cutter and enough ammunition to obliterate every passenger on board. Slipping into the bathroom in secret, he armed his weapons. Another major ISIS attack was about to begin, but Khazzani wasn’t expecting Anthony Sadler, Alek Skarlatos and Spencer Stone.

Stone was a martial arts enthusiast and airman first class in the US Air Force, Skarlatos was a member of the Oregon National Guard, and all three were fearless. But their decision, to charge the gunman, then overpower him even as he turned first his gun, then his knife, on Stone, depended on a lifetime of loyalty, support, and faith.

Their friendship was forged as they came of age together in California: going to church, playing paintball, teaching each other to swear, and sticking together when they got in trouble at school. Years later, that friendship would give all of them the courage to stand in the path of one of the world’s deadliest terrorist organisations.