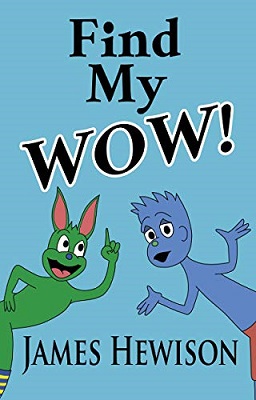 Having lost his WOW, Blue seeks help from a quirky friend called Fred who will not quit until Blue gets his wow back. Before you know it, fun-loving Fred is whisking Blue away on a zany rhyming quest.

Find my Wow is a clever and funny picture book from author James Hewison. The story is told in rhyming text which is kept to a minimum on each page and doesn’t use any hard-to-read words, plus, it is repetitive in parts.

The story is very cute. I loved the wacky illustrations that compliment the book. Fred is such a lovely friend as he tries to help Blue when he loses his wow to get it back again by all manner of different things such as building forts, dancing, making up sports, etc.

This is a quick read that will keep children entertained. It also emphasises that everyone doesn’t feel happy all the time and that sometimes you just feel down without there being a reason and that this is normal and nothing to worry about.

Find my Wow is a fascinating book that will leave the reader hopefully feeling happy and having enjoyed a lovely story. It is also a book that you could use for a discussion on how it is normal to feel out of sorts and to lose your wow now and again, and how powerful friendships can be.

James Hewison is an author of fiction for children and young adults. He was born in Darwin, on the north coast of Australia and spent his childhood swimming in crocodile inhabited waters, discovering extreme sports, and accumulating scars in other death-defying activities. When he wasn’t risking his own life, he loved reading and writing about people who were.

When James had two children of his own, they began to enjoy stories too, and none more so than the tales that he conjured out of his mind at bedtime. Every night he told them new stories, weaving in new excitement and quirky twists.

When James’s daughter was eight years old, she asked him to write a story so she could have it anytime, not just at bedtime. So he sat down with an idea for a twist on the classic fairy tale Jack and the Beanstalk. He thought five pages ought to be enough, but ideas wouldn’t stop popping into his head. The story he wrote became his first novel, Behind the Twisted Fence.

And that was just the beginning.