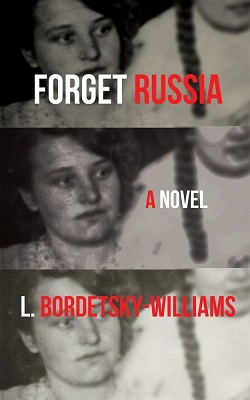 “Your problem is you have a Russian soul,” Anna’s mother tells her. In 1980, Anna is a naïve UConn senior studying abroad in Moscow at the height of the Cold War-and a second-generation Russian Jew raised on a calamitous family history of abandonment, Czarist-era pogroms, and Soviet-style terror. As Anna dodges date rapists, KGB agents, and smooth-talking black marketeers while navigating an alien culture for the first time, she must come to terms with the aspects of the past that haunt her own life.

With its intricate insight into the everyday rhythms of an almost forgotten way of life in Brezhnev’s Soviet Union, Forget Russia is a disquieting multi-generational epic about coming of age, forgotten history, and the loss of innocence in all of its forms.

L. Bordetsky-Williams novel, Forget Russia, starts with a college girl getting on an Aeroflot Soviet plane from Logan Airport, USA, to Moscow with a group of American students that want to study the Russian language in a university there. The year is 1980 during the Cold War. Anna—who is called Anuska in Russian—was going back to where her Jewish great-grandmother was raped and murdered by revolutionary soldiers and thrown into the Guilophat River.

The plot moved back to Sarah, Anna’s grandmother who recalls that her father left for America with a plan to make enough money to send back so that Sarah could bring her young daughter, Anna’s mother, to America, but Sarah’s father abandoned them. After that, during the revolution (1917-21), Sarah witnessed the abduction and rape of her mother and the soldiers burned her Jewish village. She searched the banks of the river for her mother’s body after the soldiers left. Sarah’s uncle took the sixteen-year-old into his house and put her to work in his store. Her uncle eventually found her father and shipped her to America.

During the Great Depression, Jewish people in America with Russian ancestry were encouraged to go back to Russia where they could get great jobs, and Sarah, her husband and their two daughters went back to Russia in 1931 for a while. One of the daughters was Anna’s mother, so while Anna was in Russia studying the language, she hoped to make connections to learn her great-grandmother’s history.

The story alternates between Anna writing in the first person and researching her ancestry, and Sarah, her grandmother’s story.

I found this story fascinating, and I loved how the author brought together four generations so intimately and sometimes tragically. I learned more than I expected about the Soviet Union from the story. As a reviewer, I should admit that I was already interested in the Soviet Union because the protagonist in one of my historical spy novels that is in the edit stage deals with the Russians during the Cold War in the 1980’s.

I would recommend this novel to all readers and particularly to those who enjoy, like I do, learning from historical novels. Readers will love the many characters and the quick moving pace. I rate this excellent novel five stars.

L. Bordetsky-Williams (aka Lisa Williams) grew up in New York City. Forget Russia is her debut novel published by Tailwinds Press, December 2020. Forget Russia was chosen as an Editors’ Choice Book by the Historical Novel Society. She is also the author of The Artist as Outsider in the Novels of Toni Morrison and Virginia Woolf (Greenwood Press, 2000) and has been inspired by both of these towering authors.

In 2005, she published a book of creative nonfiction, Letters to Virginia Woolf (Hamilton Books). She is also a poet and has published three poetry chapbooks: Sky Studies (Finishing Line Press), The Eighth Phrase (Porkbelly Press), and In the Early Morning Calling (Finishing Line Press). She is a Professor of English and Literary Studies at Ramapo College of New Jersey.