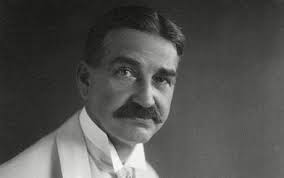 His most famous work is the children’s book ‘The Wonderful Wizard of Oz’ written in 1900, which was adapted in to the 1939 movie ‘The Wizard of Oz’ starring Judy Garland, unfortunately, he died twenty-years earlier in 1919.

However Baum’s debut book was, unusual. He wrote a non-fiction book titled ‘The Book Of Hamburgs: A Brief Treatise Upon the Mating, Rearing and Management of the Different Varieties of Hamburgs‘ yes it is a bit of a mouth full!

It turns out that Baum was a complete chicken aficionado and loved his feathered friends.

In 1876, there was a national craze sweeping America, the ‘Breeding of Fancy Poultry’ craze.

Baum was so caught up in it, that between him, his father and his brother, they set up a family business – B.W.Baum & Sons, breeding specialised chickens, mainly Hamburg Chickens.

In 1878, he then helped found, ‘The Empire State Poultry Association’ and he even became it’s first elected secretary.

His love for chickens didn’t stop there. In ‘Ozma of Oz’, the third book in the ‘Wizard of Oz’ series, Baum replace Toto, Dorothy’s side-kick, with a yellow hen named Billina.

L. Frank Baum stayed in love with chickens all his life, keeping a flock of Rhode Island Reds at his home, Ozcot, right up until his death in 1919.