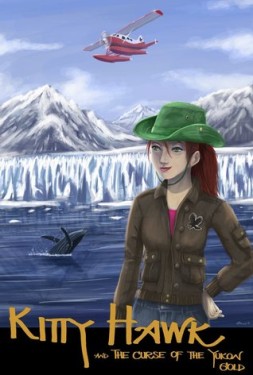 After leaving her home in the western Canadian fishing village of Tofino to spend the summer in Alaska studying humpback whales, Kitty finds herself caught up in an unforgettable adventure involving stolen gold, devious criminals, ghostly shipwrecks, and bone-chilling curses.

Kitty’s adventure begins with the lingering mystery of a sunken ship called the ‘Clara Nevada’. As the plot continues to unfold this spirited story will have armchair explorers and amateur detectives alike anxiously following every twist and turn as they are swept along through the history of the Klondike Gold Rush to a suspenseful final climatic chase across the rugged terrain of Canada’s Yukon, the harsh land made famous in the stories and poems of such writers as Jack London, Robert Service and Pierre Berton.

It is a riveting tale that brings to glorious life the landscape and history of Alaska’s inside passage and Canada’s Yukon, as Kitty is caught up in an epic mystery set against the backdrop of the scenery of the Klondike Gold Rush.

Kitty Hawk and the Curse of the Yukon Gold is a perfect book to fire the imagination of readers of all ages. Filled with fascinating and highly Google-able locations and history this book will inspire anyone to learn and experience more for themselves as Kitty prepares for her next adventure – flying around the world!

Kitty Hawk is an adventure seeking young woman of around 18 years old, straight out of high school. She loves humpback whales, and her dream is to observe and research them in Alaska.

Her father taught her to fly when she was a little girl, so with her seaplane, De Havilland Beaver, Kitty sets off on an adventure of a lifetime, flying from her home in Tofino, Canada to Juneau Alaska, to follow that dream.

Kitty Hawk is a lovely young woman. She is fun, engaging, intelligent and a brave adventure-seeker (how many young women would take off on their own to follow their dreams). The world intrigues her, its as if she can’t get enough information on any subject. She reminded me of Pippi Longstocking.

The start of the book has two prologues, which I feel didn’t add to the story. It also opens on a cliff hanger and then goes back in time, but we never hear about that cliff hanging end again, in this book.

I struggled with the first few chapters as they weren’t very thrilling or fast paced, they were there for the back story on Kitty. Then Kitty sets of on her adventure, the pace and adventure picks up tenfold – and the book really begins.

What I love about the book is all of the factual information that is blended into the story, all of which is relevant to the plot at that very moment, and I did learn a lot during the course of reading this book.

I loved reading the facts about the humpback whales, especially how they were working together to catch the fish. I also got so intrigued by the information about the Yukon Gold, Chilkoot Trail and the native mythology, that I started googling all about it, then when I got to the end, Iain had given us, the readers, links to find out more about the places in his book.

There is one bit of the whole storyline I’m not too sure on, and that is Kitty constantly talking to herself. It did irk me a bit, but at the same time, her talking to herself was where most of the comical moments came from. I’m also sure that if I was on my own most of the time I would talk to myself, but written down, I can’t make my mind up whether that was a good thing or a bad thing.

The plot is fun, engaging and full of adventure. I love that there are quite a lot of twists and turns to the story. The thieves become kidnappers Charlie, Buck, Will and Jay are four wonderfully created characters, especially Charlie who I really liked, he is a bit of a dark horse.

The storyline is split in to sections, which are all given separate names relating to the plot. This I really liked, as it gave me a slight insight into what was about to happen, but also it helped break the story up so it was more like reading numerous small chapters that one long chapter.

Kitty Hawk and the Curse of the Yukon Gold is light-hearted, action packed and fun with lots of twists, especially at the end. I feel its target market is children, around 12-15 years old, or for those interested in the history of gold mining in Alaska, or native mythology, as this book would tickle their taste buds. 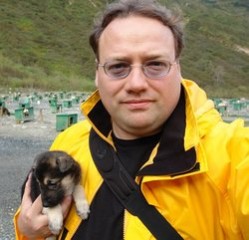 Iain Reading is passionate about Root Beer, music and writing. He is Canadian but currently resides in the Netherlands working for the United Nations.

Iain is the author of the Kitty Hawk Flying Detective Agency series, The Wizards of Waterfire series and The Dragon of the Month Club.

I Like Root Beer. When I was younger I fancied myself a bit of a Root Beer connoisseur, drinking my favourite brand (A&W, of course) from tall, narrow champagne flûtes and revelled in the sound of the ice cubes clinking against the side of the thin glass, creating a magical tinkling ambiance as I looked down my nose at all the other inferior Root Beer vintages.

As I grew older and began to travel all across the globe I was naturally inclined to seek out the very best Root Beers that the world had to offer.

Sadly, as I was to discover, Root Beer is very much a North-American thing and you can’t really find it anywhere else in the world. On the bright side, however, it turns out that the world is a pretty great place even without Root Beer.

There are a million amazing things to see and as many more ways for all of us to see them, as our heroine and friend Kitty Hawk finds out in the course of her various adventures.

You can find out more about Iain by reading – ‘The Writing Life of: Iain Reading‘

The Arctic Trails Have Their Secret Tales

By the dancing dim light of the campfire, the group of men surrounding me looked demonic—light and shadow played off their features and made their faces seem lopsided and horrifically deformed. In such light every scene appears monochromatic, with every detail rendered in shades of only black and orange. True colors are sucked away, and objects are repainted in a hellish tint that makes every face look like a jack-o-lantern and the world look like something out of Dante’s Inferno.

“There you go again,” the little voice inside my head nagged. “Always making comparisons to books that you’ve never read.”

“Shut up,” I told myself. “This is hardly the time to be criticizing my choice of literary references.”

Besides, Dante was writing about hell, wasn’t he? And the situation that I found myself in was surely the closest thing to hell that I could possibly imagine.

The tallest one of the group walked over to get a better look at me. As he leaned in close, some dark shadows flickered hideously across his face and eyes and caused me to pull away in terror. I tried to push myself backward away from him, but it was difficult, considering that I was sitting on the ground and my hands were bound tightly behind my back. Every move that I made only pulled the binding tighter and made my wrists scream in agony as the wire cut painfully into the skin.

“I never should have come out here,” I told myself as the tall one stood up again and continued pacing back and forth, trying to figure out what to do with me. How could I have been so stupid? What had I been thinking, hiking around a deserted ghost town from the Yukon Gold Rush in the middle of the night?

What made me even stupider was the fact that ever since I had first set off on my foolish quest, I’d felt a heavy, dark blackness filling every pore of the landscape. But instead of turning back and going home, I had stubbornly dismissed it as merely the dark shadow of the suffering and death that had occurred here so long ago, when thousands of souls had passed through on their way to the empty dreams of the Klondike gold fields. How many of those greedy fools had died chasing after those empty dreams?

“I am no better than them,” I thought. I was just as stubborn and foolish as they had been, and now I was paying the price for it.

“I hate to say that I told you so,” the little voice in my head said.

“Yes, you did,” I agreed. “But right now, that isn’t helping. Right now we have to figure out how to get out of here, because these guys are a bunch of greedy fools just like the rest of them, and who knows how far they’ll go to protect the secret of their gold.”

“What are we going to do with her?” the man with dark blonde hair asked the tall one, who was apparently their leader.

The tall one thought about this for a moment, and there was a long silence, broken only by the crackle of the nearby campfire. My fear of his answer made my heart pound faster and faster.

“There’s only one thing we can do with her,” he said slowly and deliberately, his voice ice cold and emotionless.

I was terrified of what that meant, and as they continued to discuss my fate among themselves, I could feel the tears welling up in my eyes and my breathing becoming shallower and faster with every passing second.

“I promise not to tell anyone,” I thought, feeling completely helpless and considering the option of begging them to let me go. “I will promise not to go to the police if you just let me go free.”

“Don’t be crazy,” the little voice in my head scolded. “They aren’t stupid. You discovered their secret! You know about their stolen gold!”

I remembered a line from a poem that I’d learned back in high school—a poem about the Klondike Gold Rush and the lengths that men were driven to by their greed and lust for gold.

“The Arctic trails have their secret tales,” the poem had said. “That would make your blood run cold.”

That was exactly how I felt at that moment—as though my blood was running cold. I had discovered the secret tale that these men had tried to keep hidden, and now they had no other choice. They couldn’t just let me go. They couldn’t trust me to keep their secret. And now they had to deal with it. And that was the part that terrified me.

The men continued their discussion, and a sudden outburst from the tall one broke my train of thought. The discussion had grown quite heated, and he’d finally put an end to it by holding up his palm and cutting off the blonde one in mid-sentence.

“There’s no other way,” the tall one said simply.