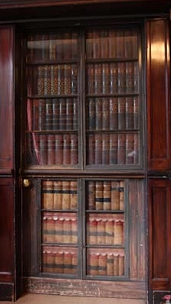 In March 1856 author Charles Dickens bought the country home Gad Hill Place, in Higham Kent, from his fellow writer Eliza Lynn which he lived in until his death in 1870.

In his new study he had a secret door built. The door was made to look like a bookcase, so that when he was working in his study the room was filled with just books.

The fake bookcase was full of bogus books with silly titles that Charles Dickens had invented.

Some of the titles included, ‘The Life of a cat’ in nine volumes, ‘Hansard’s Guide to Refreshing Sleep’, ‘Socrates on Wedlock’, ‘Was Shakespeares’s Mother Fat?’ and ‘History of a Short Chancery Suit’.

Fact – The house still stands today but it is now Gad’s Hill School.