Give Place To Wrath by Steven C Harms – Book Review

Give Place To Wrath by Steven C Harms – Book Review 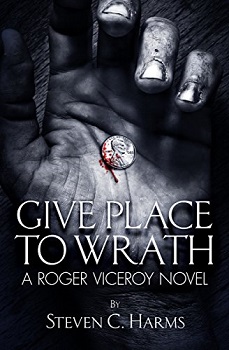 Give Place To Wrath

Detective Roger Viceroy, divisional head of the Midwest Region Special Crimes Unit, awakes one morning to a bombing in a wealthy suburb of Milwaukee. As he and his team dive into the investigation, a mysterious clue launches a manhunt with scant other evidence to point them in the right direction.

Over the coming weeks, the related murders unfold, each with a unique twist and the same clue left behind. Viceroy uncovers one other common thread – a seemingly random association with the small north woods town of Curwood, Wisconsin.

As the death toll mounts, Viceroy has to connect the dots and stop the carnage before it reaches the final target, Governor Kay Spurgeon. Within a crowd of tens of thousands on a clear October day, one man hides. Viceroy must find him.

Give Place to Wrath, kicks off with a bombing on the sixth hole of a golf course in a wealthy part of Milwaukee. Clues are unearthed, a calling card discovered and the possibility of other murders is pretty much guaranteed. The hero cop is Roger Viceroy who is tasked with connecting all of the dots and hunting down the assassin. He’s accompanied by his partner ‘Silk’ and aided behind the scenes by his pastor friend ‘Ox’. Both great names for puns and we’re given plenty of them.

I felt like there was almost zero depth to any of the characters. Each of the main cast is given a couple of sentences of background but there seems to be no thought invested in character development. For example, ‘Silk’ is an ex basketball prospect with a ‘smooth’ jump shot, who’s talented outlook was cut short by a gang bullet in the leg. I found this to be unoriginal and so obvious.

Midway through the book there is a vile sexual assault scene, which to me came across as poorly written and awkwardly graphic, I’m wondering why the author included it. From experience it’s usually what you don’t read that is most shocking and if you are going to include a rape scene then the writing needs to be top notch. Probably not the best thing to attempt in a debut novel.

Another annoyance was how inept Viceroy turns out to be in the latter stages of the book. When he’s reviewing and talking about the latest case news with his colleagues he fails to see the glaringly obvious link between key pieces of evidence. It’s the equivalent of attending a pantomime with the crowd shouting ‘he’s behind you!’ at the actors on stage. Realistically he could have had the case solved by page 100.

What starts as a good idea for a storyline with a decent amount of scope for a 300 page crime novel very quickly descends into an amateurish ordeal. If there was a hint of interest in the first two chapters there was definitely zero left at the conclusion of the story.

Steven C. Harms is a professional sports business executive with a career spanning over thirty years across the NBA, NFL, and MLB. He deals with Fortune 500 companies and professional athletes, managing a portfolio of multi-million dollar sports partnerships.

He’s an accomplished playwright in his hometown having written and produced a wildly successful theatrical production which led him to tackling his debut novel, Give Place to Wrath.
A native of Wisconsin, he graduated from the University of Wisconsin–La Crosse. He now resides in Oxford, Michigan, a small, rural suburb of Detroit.