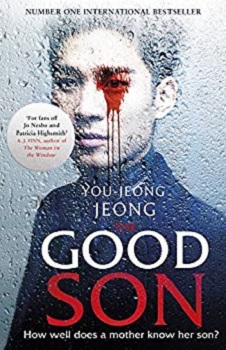 YOU DIDN’T DO IT. DID YOU?
HOW COULD YOU, YOU’VE ALWAYS BEEN THE GOOD SON

When Yu-jin wakes up covered in blood, and finds the body of his mother downstairs, he decides to hide the evidence and pursue the killer himself.

Then young women start disappearing in his South Korean town. Who is he hunting? And why does the answer take him back to his brother and father who lost their lives many years ago.

The Good Son is inspired by a true story.

Yu-Jin has a doting mother and a brother who loves him. Other than a few health issues he believes he has led a relatively normal life, until one morning when he wakes up covered in blood and finds a dead body downstairs, his mother’s. Determined to find out who did this, how and why, Yu-Jin begins an investigation of his own which leads to some very unexpected results.

The good son is a book that will keep you hooked throughout with many twists and turns along the way. You go through a wave of emotions and your feelings for the characters change with every chapter.

Throughout the story the character development increases giving you a clear and very believable idea of what they are like; you’ll feel pity, sadness, anger and disbelief at what they are/can be capable of.

I very much enjoyed the story, the way in which it was written made it clear and simple to understand. I liked the different emotions I felt whilst reading and the twists kept the story interesting. I also found the ending, although quite sad, surprisingly satisfying.

I really did not want this book to end.

You-jeong Jeong was born in Hampyeong, South Korea. She initially trained and worked as a nurse. She is now South Korea’s leading writer of psychological crime and thriller fiction and is often compared to Stephen King and Raymond Chandler.

You-jeong is the author of four novels including Seven Years of Darkness, which was named one of the top ten crime novels of 2015 by the German newspaper Die Zeit. Her work has been translated into Chinese, Japanese, French, German, Thai and Vietnamese. The Good Son is the first of her books to be translated into English.