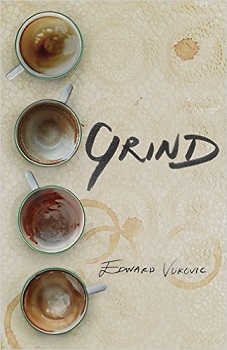 Ziva’s love of coffee is double-edged. Throughout her life, she gives her talent freely to those desperate for a glimpse into destiny’s promise. Predicting the future with chilling accuracy, she understands the cost and has sworn never to divine her own truth. Having fled the economic aftershocks of the Balkan war, she struggles adjusting to her new life and clings to the remnants of her past, until she meets Isaac.

Against her better judgement, Ziva ‘reads’ for herself and what she sees will change her life irrevocably. Told from the perspective of multiple characters, Grind follows the plight of Ziva, an ordinary immigrant with an extraordinary gift, and highlights the impact we have on each other through the interconnectedness of chance encounters.

A FINE DRAMA FROM A CLOSET POET!

Grind as in coffee is an engrossing book. Ziva, of Macedonian heritage with ties to Bosnia and Serbo-Croatia and the horrors those names conjure, living in Australia with her brother Ivan and his wife, start off this wonderful creation from the mind of Edward Vokovic.

Simon, the realtor, Isaac the bar-owner and secret poet, Michel the ‘homeless’ smoker who has a dark secret or two and Danielle, the school girl, complete the cast of principal characters.

I was immediately drawn into Ziva’s mysterious world of steaming cups of dark coffee and felt an urgent need of a caffeine fix. The lives of these people intertwine as the story weaves on into a strange tapestry of events culminating in a fitting end to a glorious start.

Simon has a blow out in Isaac’s bar; Ivan almost buys a home from Simon; Michel is the shadowy cigarette smoker who befriends Danielle, not realising he knows her from a previous life; Danielle is the girl at the lights. And they all, except Ziva, come together in a brief span during rush hour one day. I’m watching the events unfold through the eyes of a traffic camera.

The budding romance between Isaac and Ziva is written with a delicate touch without going into crass details, which would have detracted from the story. Vukovic made me feel for Simon and his bad day. Even my horror faced with Michel’s past turns to satisfied retribution.

I like the fact that Vokovic has no loose ends. All the threads in Grind are neatly tied and Vukovic never loses focus. He weaves the story using different POVs keeping it tight using the first person narrative, not letting the secondary ones go astray.

Grind is a fine novel! What a great compliment to Indie writers to have one of Vukovic’s calibre in their midst. And he can write fabulous poetry too! 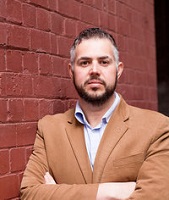 Edward Vukovic is a Melbourne-based writer and novelist. He has work published across numerous publications including The Journal, The Adviser, The Roar and Shoot Farken.

When he’s not writing about his poor parenting skills or fantasy football you will most likely find him hurling instructions at the television, steadfast in his belief that the players of whatever sport he’s watching at the time are actually listening to his ranting.

Edward is married to his wonderful and talented wife Vesna and is a proud, if sometimes bewildered, father to his amazing son Oliver.