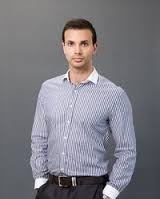 Born in Regional Victoria, Australia in 1990, Rhys Hagan displayed a passion for creative writing throughout his childhood years.

After high school, he joined the Royal Australian Army as a rifleman to develop skills he will carry with him for life. His experiences have also enriched his perspective as a writer. He regularly draws on his time in the military as a source of inspiration for his writing.

As 2012 came to an end, my family and I found ourselves closing a six-year chapter in our lives. Along with my mother, four sisters, and brother, I had attended various congregations my entire life. We finally settled down when we came to a small and somewhat isolated church on the outskirts of a small, regional town. The pastor was eccentric and charismatic with theatrical animation and, what would later be determined as, cunning manipulation.

Before long the church leader began showing telltale signs of a cult leader such as inducing fear in the members of her following and isolating us from the outside world—two things that were necessary in order for her to make the members perform as she desired. She subtly introduced her wiles to convince me and many others that she, and only she, was capable of interpreting the will of god.

The illusion was shattered in early 2012 when her controlling nature would reach breaking point. She found a child to be disrespectful so, as punishment, she lifted him off the ground by his ankles and dropped him on his head. She then ripped his shirt and asked other members to reprimand him.

Unable to justify the actions that took place that night, my family and I left the group and reported the events.

After consulting with a range of mental health professionals, the overwhelming consensus was that the pastor displayed most of the characteristics of a cult leader and, even had a similar profile to a sociopath; although it’s impossible to tell without close examination.

Outlaw bikers, rogue police, brutal gangsters and a ruthless assassin converge in the city of Shoremont to claim the bounty on Ryan Hall’s head and recover the girl he rescued—Taylor Brown.

Taylor is the daughter of a powerful and calculating mob boss, Cameron Brown, who isn’t sparing any expense to know his daughter is safe and exact vengeance on those responsible for her kidnapping.

While the depraved maniacs of the city scrounge for their reward, Detective Jesse Wishman and Larry Manning must confront the mutual pain in their pasts if they hope to successfully resolve the case. When Manning’s daughter, and Wishman’s fiancée, was killed; it caused them both to spiral into obsession and self-loathing until they were forced to meet once again.

Join the estranged detectives as they attempt to defy the odds by clearing Hall’s name and uncover a conspiracy behind the disappearance of a child.