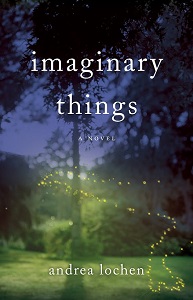 Burned-out and broke, twenty-two-year-old single mother Anna Jennings moves to her grandparents’ rural home for the summer with her four-year-old son, David. The sudden appearance of shadowy dinosaurs forces Anna to admit that either she’s lost her mind or she can actually see her son’s active imagination.

Frightened for David’s safety, Anna struggles to learn the rules of this bizarre phenomenon and how best to protect him. But what she uncovers along the way is completely unexpected: revelations about what her son’s imaginary friends truly represent and dark secrets about her own childhood imaginary friend.

Living next door is Jamie Presswood, Anna’s childhood friend who’s grown much more handsome and hardened than the boy she once knew. But past regrets and their messy lives are making the rekindling of their complex friendship prove easier said than done.

Between imaginary creatures stalking her son and a tumultuous relationship with David’s biological father, Anna may find it impossible to have room in her life or her heart for another man. But as David’s visions become more threatening, Anna must learn to differentiate between which dangers are real and which are imagined, and whom she can truly trust.

Excerpt from Chapter One

There was something about driving an ancient Dodge Caravan packed with all of my worldly possessions, including my four year-old son and my cat, that reeked of failure and desperation. The back of the minivan was crammed with duffel bags of clothing and cardboard boxes filled with pirate action figures, perfume bottles, matchbox cars and race track pieces, sketchbooks, a remote-controlled dinosaur, mascara wands and eyeliner pencils, markers and stubby crayons; and black garbage bags stuffed with everything else: David’s rocket ship comforter, my flat iron, winter coats, story books, sandwich baggies full of earrings, and half-eaten boxes of Little Debbies that were probably smushed by now.
I’d sold my bed, couch, and kitchen table for a fraction of their worth and had given my TV to Stacy for all the times she’d watched David for free. I’d also asked her to hold on to my rocking chair, the one piece of furniture I couldn’t bear to part with, until I could come back for it. I’d taken bags of clothes and toys that David had outgrown plus my old dresses, purses, and shoes to Goodwill, and still the minivan was bursting with the painfully mundane trappings of my life.
If I’d sped past myself on the highway five years ago (and undoubtedly I would have, because the Caravan wasn’t capable of high speeds), I would have looked at the maroon minivan missing its hubcaps; the back windows blocked by lumpy garbage bags and last minute additions to the trunk like Candy Land, a bag of kitty litter, a dustbuster; and then the driver—a pretty, twenty-two-year-old girl with dirty blond hair and a perfect nose sporting glamorous sunglasses, a bleach-stained T-shirt and frown lines, and thought—where the hell did she go wrong? And then I would’ve zipped past, changed lanes, secure in my own bright future, and forgotten her.
Ha. What a sucker I’d been. What I sucker I still was.
I raised my eyes to the rearview mirror and caught a glimpse of David rocking back and forth in his booster seat, singing quietly to himself, “The tie-ran-a-suss rex had big big teeth, big big teeth, big big teeth. The tie-ran-a-suss rex had big big teeth when dino-suss roamed the earth.” In her pink crate on the seat next to him, Vivien Leigh was mewling her dissatisfaction, as she had been since we’d left Milwaukee an hour ago.
“How you doing back there, buckaroo?” I called over my shoulder. He lifted his blond head and squinted thoughtfully. “Me and kitty are singing,” he said. “I can hear that. Do you need to go potty?” He squinted again and cocked his head. “No.” Which meant yes.
I popped a stick of watermelon gum into my mouth. “We’ll stop at a gas station in a few minutes and you can go.”
The AC had been wheezing and puffing out only a tepid breeze, so as soon as I pulled off at the next exit, I cracked the windows and the pungent, familiar smell of manure blew in. Yep, definitely not far from our new home now.
Strands of my hair whipped across my face, and I wished I could remember where I had packed my brush—probably in one of the duffel bags at the very bottom of the pile. Oh well. Who was there to impress at this Podunk gas station anyway? There were only four pumps, and a homemade sign advertising BAIT! BRATS! HOTDOGS! God, I hoped there were indoor bathrooms.
“Can kitty come out, Mommy?” David asked as I unstrapped him from his booster seat. Sensing freedom was near, Vivien Leigh was yowling for all she was worth.
“No, she’s fine,” I said and held out my arms for him to jump down. “We won’t be long.”
David curled his pointer finger around one of the metal bars of her crate sympathetically. “Do you want food, kitty? Do you want to play? Do you need to go potty?”
I glanced inside her crate. She shot me a haughty look and then, seeming to think better of it, let out a pitiful meow. “Oh, don’t be such a diva.” I manually propped the side windows open an inch.
David looked unconvinced, but he slid into my arms anyway.
Inside, a country music radio station played over the speakers, and the tiled floors looked like they hadn’t been mopped or swept in twenty years. Crystals of salt leftover from winters long ago stuck in the soles of my sandals. David galloped straight for the candy aisle.
“No candy,” I said in my best I’m-not-in-the-mood-so-you-better-not-startvoice.
The man at the register craned his neck to get a good look at us, but I ducked behind a rack of trucker hats as I steered David’s little body to the restroom. Suspicious of what state the bathroom would be in, I flung the door open and flicked the light on with my elbow. It was pretty much in keeping with the rest of the gas station: sad gray tiles, scrunched-up paper towels on the floor, drippy faucet, toilet seat flipped up to reveal what I hoped was a ring of mildew.
“Don’t touch anything,” I instructed David and guided him inside.
He stood in front of the toilet for a second and then faced me. “Go outside, Mommy.”
“Just go potty, David.”
He frowned. “Go outside. I’m a big boy.” It was his rebuttal to everything lately.” 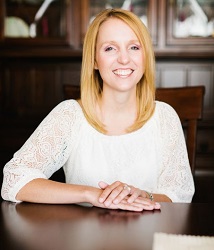 Andrea Lochen is the author of two novels. Her first novel, ‘The Repeat Year’ (Penguin 2013), was praised by Kirkus Reviews as “an engaging, satisfying read that explores friendship, love and who we really are when it truly matters.” A draft of the novel won the 2008 Hopwood Novel Award.

‘The Repeat Year’ was also produced as an audiobook (Brilliance Audio) and translated into a German edition (Ullstein Buchverlage). The film option was sold to Ineffable Pictures.

Since 2008, she has taught undergraduate writing at the University of Wisconsin-Waukesha and was recently awarded the UW Colleges Chancellor’s Award for Excellence in Teaching.

Andrea currently lives in Wisconsin with her husband and daughter and is at work on her third novel.