Invisible in a Bright Light by Sally Gardner – Book Review

Invisible in a Bright Light by Sally Gardner – Book Review 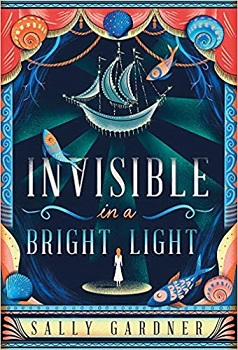 Invisible in a Bright Light

From I, Coriander to Invisible in a Bright Light, Sally Gardner’s first middle grade novel in 14 years soars with the imagination of a master story-teller. A pitch-perfect story about a crystal chandelier that splinters into a thousand pieces, a girl abandoned as a baby on the steps of an opera house and a dangerous game called the Reckoning.

It is 1870: opening night at the Royal Opera House in a freezing city by the sea, where a huge, crystal chandelier in the shape of a galleon sparkles magically with the light of 750 candles.

Celeste, a theatre rat, wakes up in a costume basket from what she hopes is a bad dream, to find that everyone at the theatre where she works thinks she is someone else.

When the chandelier falls, she is haunted by a strange girl who claims to know Celeste’s past and why she must risk playing a game called the Reckoning to try to save the people she loves.

Celeste is rudely awakened by a theatre worker shouting at her and telling her to get out of the costume basket. She is annoyed that the worker would have the audacity to shout at her and why is she in the basket?

Her day goes from bad to worse when people treat her like the lowest of the low and a worker, it’s not until she can’t find her mother and someone calls her by a different name then a vivid dream comes crashing back to her, including a dangerous game she was playing with a man in a green suit and a shipwreck. It would seem that she is still playing the game and has been trapped in the body of a different young girl.

When a chandelier in the shape of a galleon, a commission from the king for the missing ship ‘Empress’, falls and smashes Celeste is injured and rushed to hospital, but now she starts seeing a young girl who seems to know about Celeste’s real life and the game that she is playing in real life. Can Celeste get her true identity to come to her and lift the fog clouding her brain, or will she lose this part of the game and leave those lost trapped forever?

This is the first book by author Sally Gardner I have read. Invisible in a Bright Light is a magical and enchanting story that gets the reader involved in the plot and the character’s lives.

The opening scene had me very intrigued and I was eager to read on. However, after the initial excitement we moved onto the main plot and unfortunately it wasn’t only Celeste’s brain that became hazy, mine did too. The book took a lot of concentrating, re-reading and making notes so I could keep up with what was happening. Don’t get me wrong, the book is enjoyable it is just a little hard to decipher at times as the story seemed to go in numerous directions at once.

I do wonder whether the above was intentional though as we know that Celeste is a muddled young girl, and I’m wondering whether the muddling of the reader was to help them understand what Celeste was going through? Very clever if this was the intent as it makes the reader have to think hard.

The book is a full-on adventure and sometimes a little dark, especially the beginning and often mysterious. The characters were all intriguing and interesting to read about and the game had me wanting to know more. The book is set in a theatre and the descriptions of the theatre back in the late 1800s was such a delight to read about and I could perfectly visualise the workings of the place.

The story is certainly unique and whilst it might have taken me a while to get through it, I’m glad that I did as it is a book I will remember for a long time to come.

I, Coriander won the Nestlé Gold Award and she is also a Costa and Carnegie prize-winner. Her books have been translated all over the world and have soldover two million copies. 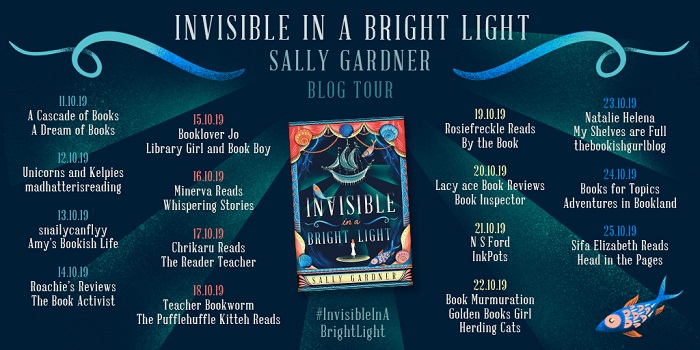 What did you think of Invisible in a Bright Light? Share your thoughts in the comment section below!