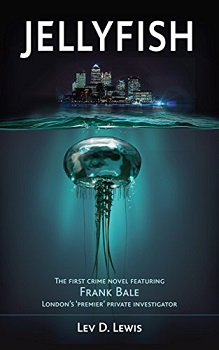 When Frank Bale was a lawyer, he wore Savile Row suits. Now he has holes in his trousers and serves papers for other, successful, lawyers. Life is bleak but he is kept going by a Philip Marlowe obsession and a longing to prove himself.

When a student winds up dead, he gets the chance to investigate a real crime, relying on advice found in an old ‘Tradecraft Manual’ and the sayings of his nan. But neither the manual nor his nan nor Marlowe prepare him for handling the slimiest of London’s underbelly, jellyfish, who hit back first with fists, then with golf clubs and finally with guns.

Can Frank stay alive long enough to find the killer – and get the girl?

Jellyfish, revolves around Frank Bale: A private investigator and process server. He cannot be said to be living his dream as his once blossoming career has been reduced to a shadow of its former self. This is due to a terrible mistake on his part.

Frank encounters some challenges during the course of his duties which leaves him unconscious in an alley. When he finally regains consciousness, he discovers the body of a girl he met earlier, lying lifeless in the same alley.

After discovering the body, Frank Bale does the only thing that seems reasonable to him. He tries to call the police but the reality hit him, the reality of him being the prime suspect. Consequently, he drops the phone and leaves immediately.

Notwithstanding, after the police appear on the crime scene and conduct inquiries, Frank Bale is taken in for questioning as the prime suspect. Hence the investigator becomes “the investigated”. Will the mystery behind the murder be uncovered?

Jellyfish is a fictional book with amazing characters. Every character fit their role so well, and all contributed in making the story interesting.

This book is a full of suspense, it has a good humour and a nice storyline with a twist which I really enjoyed. This book will appeal to lovers of crime scene investigation.

It appears that the author (Lev.D) was saving the best for last and revealing the story bit by bit.

But that’s where the similarities end. I have never been a process server, let alone a private investigator. Writing has been my fantasy, which has brought me to here.