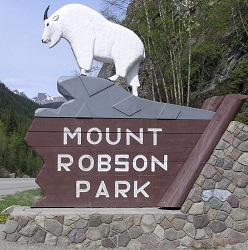 Last Year we went on a trip to Canada. And if you ask me, it was about time! 🙂

As I’ve mentioned before, I am from a tiny village in Lower Austria called Nasswald. Conrad Kain is also from Nasswald. He was a famous mountaineer in Canada and I am a huge fan of him. I am very proud to share the same home village as Conrad. Unfortunately, he is not that famous in Austria as he is in Canada, or even New Zealand.

Conrad made many first ascents, but one of his greatest success was the first ascent of Mount Robson (3.954 m) in 1913, part of the Canadian Rockies. The route he and his companions took is named after him, The Kain Face. 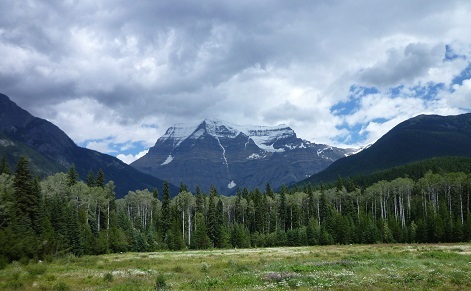 I’ve always wanted to go to Mount Robson and see for myself what Conrad had accomplished, and in July 2016 the day has come.

My boyfriend and I went on a hike on the Berg Lake Trail, a 24 km long trail up to Mount Robson Pass and it turned out to be one of the best times of my life.

The Berg Lake Trail is one of the most beautiful trail I have ever set a foot on. The landscape is one of a kind: turquoise rivers, turquoise lakes, huge waterfalls, including the largest, Emperor Falls, and always with Mount Robson in sight.

The Berg Lake itself is on the north face of Mount Robson and some 21 Kilometres up the trail. It is 2 kilometres long and elevated 5,400 feet. It is a very beautiful sight to see. Three glaciers run into the Lake: the Robson Glacier, the Berg Glacier and the Mist Glacier. It is dotted with icebergs, even in the summertime.

It took us six hours to get to our campground, the Rearguard Camp Ground, 23 Kilometres from where we started our journey. There is only place for 5 tents. After we set up ours we went for a walk to Mount Robson Pass.

Even though the camp grounds were full, it was so silent up there. The rumbling of the Mount Robson Glacier was the only sound, and one I will never forget. It was like the glacier was alive and talking to us. And it made us realise, how tiny we are and how powerful and gigantic nature is.

The next day we took the same way back down. Both directions we didn’t encounter any bears. We must be the only hikers never to of seen any! 😉

Back at the Mount Robson Information Center we visited the exhibit about Conrad Kain which is in the basement.

If you ever have the chance to visit Banff or Jasper National Park, take the time and drive the one hour up to Mount Robson Provincial Park and hike the Berg Lake Trail. I promise, it is an adventure you will never forget.

Please note, that you have to make a reservation for a place on one of the Camp Grounds. You can do it online at: www.secure.camis.com/discovercamping//BergLake. We did it the day before the hike on-site. All campgrounds have bear proof food storage lockers, pit toilets, washbasins and grey-water pits. There are no showers, no flush toilets and no fires allowed. Camp stoves are mandatory for cooking.

Tour Facts:
Distance: 24 km
Start: Mount Robson Provincial Park
Price: Free to hike on the trail but there is a trail fee charged for those that hike/camp overnight.