The Lone Wolf at Cover by John Michell – Book Review

The Lone Wolf at Cover by John Michell – Book Review 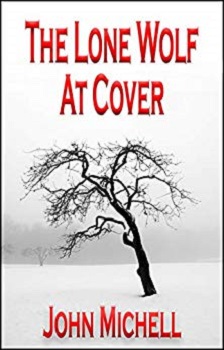 The Lone Wolf at Cover

The Lone Wolf at Cover is a book for readers interested in espionage, international relations, and the many facets of human interaction. At its basic, the novel is a dark story of human frailty, one offering a fresh slant on the popular Cold War spy fiction genre. Its main character, Joe Lambert, is a British spy unburdened by outrageous talents. Beyond detailing in first-person his life and times as a spy during the Cold War, Lambert’s narrative is also infused with a human interest story tenuously biographical of the author reflecting office politics; internecine career ambition; and human foibles, limitations and imperfection. Actual historical backdrops give the novel further realism and anchor it to the Cold War period.

Lambert is an emotionally isolated man who in 1965, in an accident of UK political history, becomes recruit into the British Secret Intelligence Service. Over the ensuing twenty-five years, he battles his personal demons and hostile colleagues, firstly seeking career fulfilment before becoming an uncompromising avenger driven by the KGB’s murder of his first love.

Lambert’s quest for revenge brings him into conflict with his own Service and the CIA. He also discovers he is a KGB recruitment target – and finds love for a second time. Lambert’s story is brought to its conclusion in 1990, while on a Top Secret mission in Moldova, at a time when the Soviet Union is preparing to implode and the end of the Cold War nears.

Like many before him John Michell has drawn on a long career to give others an insight into his former trade in the form of a fictional work. In The Lone Wolf at Cover he has produced a classic spy story built around the flawed loner, Joe Lambert. There are some lively moments alongside much introspection by Lambert.

The story is told in the first person which makes it easy to see everything from Lambert’s perspective but at times the author has found it necessary to describe events elsewhere. He does that by referencing a future interview with a defected foreign spy which I found challenging at times.

As a character Lambert is believable and understandable; some readers may even have an affection for him. The other characters are adequate for the story but with the exception of Liliana most lacked warmth and depth but this was to some extent because we were relying on Lambert’s view of them.

I enjoyed reading about the various locations that Lambert travelled to and I note his tendency to give them authenticity by including local place names and activities. This is a good technique, provided the information is correct. Unfortunately for some of the events in my part of the world there were several errors. Yes, they were trivial and they were inconsequential to the plot but I found them irritating and they totally defeated their purpose. I also have a concern that if the information relating to my local area was not correct, then how accurate was the detail about the other countries?

If you are a potential reader who lived in the south-east of the UK in the sixties, seventies or eighties then you will easily spot the inaccuracies. If you’re not, then I won’t spoil the story for you.

As with all good spy novels the plot gets complicated towards the end with several possible outcomes. Given the flawed detail and the awkwardness of the reported information from the defected spy I cannot give The Lone Wolf at Cover a wholehearted recommendation. I have awarded three stars.