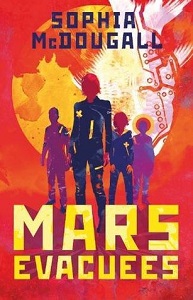 The fact that someone had decided I’d be safer on Mars, where you could still only SORT OF breathe the air and SORT OF not get sunburned to death, was a sign that the war with the aliens was not going fantastically well.

I’d been worried I was about to be told that my mother’s space fighter had been shot down, so when I found out that I was being evacuated to Mars, I was pretty calm.

And despite everything that happened to me and my friends afterwards, I’d do it all again. because until you’ve been shot at, pursued by terrifying aliens, taught maths by a laser-shooting robot goldfish and tried to save the galaxy, I don’t think you can say that you’ve really lived.

If the same thing happens to you, this is my advice: ALWAYS CARRY DUCT TAPE.

‘Mars Evacuees’ opens up on Earth, an Earth in which an invisible, alien race called the Morrors has settled on.

They have settled on the Poles which are more suitable to their needs. Everything is fine to begin with but after a while, the Morrors want more than the Polar ice-caps and begin to reverse engineer global warming, potentially leading to a new Ice Age.

We are introduced to Alice Dare, our narrator, and daughter of all awesome Stephanie Dare, an all action super-hero pilot, scourge of the Morrors and rallying call for the Exo Defence Force (EDF).

Alice is being evacuated to Mars, for despite the best efforts of her mum and the EDF the war with the Morrors is not going at all well. Alice is packed off to an unfinished Martian colony, along with other children, who have been selected due to parental influence, aptitude and intelligent tests and via lottery.

This is an interesting take on how other countries would potentially look at an unfolding crisis and how the children of our future would be picked according to culture.

Alice is wonderfully deadpan and a descriptive narrator, whether discussing her school uniform in near arctic temperatures; ‘Horrifying sludge-green uniforms in which we were all slowly dying of hypothermia while the teachers could wear as many jumpers and coats as they liked’, Or when thinking on forgiveness; ‘I wasn’t sure if I had forgiven him over that Somnolum X stunt, but on the other hand I wasn’t sure I hadn’t’, Wonderful and true of all of us at one time or another.

Mars Evacuees is full of wit, action, humour, triumph, diversity and homework. It is superb and I cannot wait to get started on the sequel ‘Space Hostages‘.

Oh, and as an aside, to the publisher who rejected Ms McDougall’s Mars Evacuees on the grounds of featuring too many girls in space, really? You missed out on a fabulous book.

Sophia McDougall (born 1979) is a British novelist, playwright, and poet, who studied at Oxford University in England.

She is best known as the author of the series of books: Romanitas in which she creates an alternative history, one where the Roman Empire still exists in contemporary times.