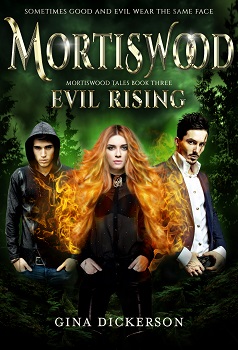 The problem with secrets is they don’t always remain secret, no matter how long they’ve been buried.

The dark side of magic beckons to Kaelia. It whispers in her ear, seducing her with the promise of yet more power. Having discovered the truth behind the goddess Hel’s connection to Bran the necromancer, Kaelia is finding it increasingly difficult to tell who is on her side and who is against her.

Drawn into an age-long battle, she must fight to protect not only those she loves, but also the humans that her enemies, The Salloki, would devour. Confronting an evil never seen before outside the realms of myth and magic, Kaelia is torn. Should she join with Bran? Is he really as trustworthy as he says?

But trust cuts both ways as Bran too discovers, unearthing both secrets and lies about his true identity. There is also someone he wants to protect above all, even if that price is unleashing upon Mortiswood the fearsome Vanagandr.

‘Kaelia!’ Father Peter’s voice rose. ‘Bran is the only one who can truly defeat the Draugr. You must join with him. You’ll be stronger together.’
‘What?’ Bay said. ‘Don’t be stupid, Kaelia isn’t going to join with him.’ He pulled Kaelia’s arm from the priest’s grasp.
Kaelia smiled briefly at Bay. ‘You don’t need to stick up for me.’
Gunnarr scratched his bristly chin. ‘The Father wouldn’t suggest such a thing, step back, lad,’ he said to Bay. ‘Let me look at him.’ He twisted Father Peter around on the chair he sat in, and stared into the priest’s eyes. Slowly, he drew in a whistle of breath. ‘Who are you?’ He signalled to Christina. ‘I think the intruder you smell is inside Father Peter. I reckon there’s something controlling him. His eyes have the look of it.’
‘Let me use my Vallesm nose.’ Christina shook until she was a blur of clothes and fur before taking her Vallesm shape. With her wolf nose, she sniffed the priest from feet to head before returning to her human form. ‘You’re right. Someone has sent him here with a spirit hidden inside him.’
‘Then we must exorcise the spirit.’ Gunnarr scratched his head. ‘If we can figure out what the controlling spirit is.’
‘I’ve seen someone possessed by a Draegarni before. Maybe this is one.’ Kaelia knelt down before Father Peter. ‘Can you hear me?’
‘Yes,’ Father Peter’s mouth moved although his voice still sounded peculiar. ‘You know I can.’
It sounded as if Father Peter’s voice belonged not to that of an old man but to a man much younger. Kaelia frowned. Or to a man who appeared to be much younger than he actually was. A man who had lived for centuries yet did not age.
‘What are you doing?’ Gunnarr asked. ‘Don’t talk to the spirit. We’re not sure what it is. It could leap from Father Peter’s body at any moment and possess one of us… it could possess you.’
‘It’s a Draegarni demon, I know it.’ Kaelia looked into Father Peter’s eyes. ‘I also know who’s controlling the Draegarni. Where are you?’ she asked the controlling spirit.
‘Don’t engage in conversation with the spirit,’ Gunnarr continued to warn.
Ignoring him, Kaelia repeated her question.
‘Come and find me.’ Father Peter’s wrinkled face lifted into a mocking smile. ‘You can always find me, Kaelia, if you want to.’
‘If I come to you, will you release the priest?’ Kaelia’s fingertips tingled with her light. She felt the power beginning to tremble inside of her, making the hairs on her arms stand up in the prickle of goose-bumps.
‘If I really have to.’ A shadow flickered across Father’s Peter’s left iris to the right, before being blinked away. ‘You will have to promise you will come first.’
Fizzles of blue-white light slithered from Kaelia’s hands and floated around her thighs. Crackles of light sparked over her eyes. She could feel the power awakening, telling her to go, wanting her to, needing her to. ‘I will.’
‘You have to say the proper words,’ replied Father Peter in a mocking tone. He clicked his tongue against the roof of his mouth several times.
‘Don’t play games,’ Kaelia snapped.
‘Stop this, Kaelia.’ Bay paced around her and Father Peter. ‘You are already playing his game by talking to the Draegarni.’
‘I’ll only release the old man when you say the proper words, Kaelia.’ Father Peter rubbed his eyes. ‘Promise you will come to me.’
Kaelia stepped away from Father Peter and the table. She knew Christina and the others were watching her and that they were speaking but she was suddenly deaf to their words. She shivered. It was there, inside of her. Not the word “promise” but the promise of how she would feel if only she connected her power with his.
‘Kaelia, no!’ Bay reached for her, his words the only ones to cut through the lure of connected power. ‘I won’t let you go, not to him!’

Gina Dickerson lives by the Thanet coast on the north-eastern tip of Kent within the UK, with her family and bouncy Siberian husky.

Having previously worked for a Local Authority, and been a Systems Supervisor for the departmental database, Gina is now a full-time author and designer. Her books include the dark urban fantasy Mortiswood Tales series, Lies Love Tells – part of the thrilling romantic suspense Eastcove Lies series, dark fairy tales The Pennington Christmas Curse and Always Golden, as well as a collection of her dark short stories, Underleaf.

Gina has also written newspaper articles, and was a fashion and shopping columnist for her local newspaper, as well as having had short stories and poetry published in anthologies. She designs book covers and other promotional material under the name RoseWolf Design, and belongs to the author co-operative Authors Reach. 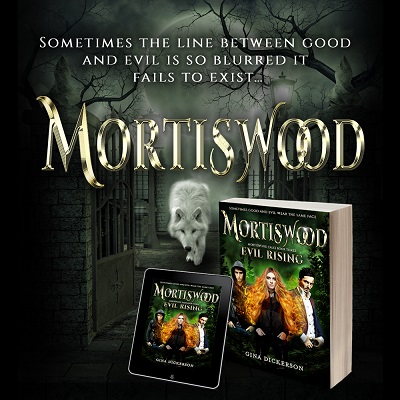