I’m not a Pandacow by M.T. Sanders – Book Review

I’m not a Pandacow by M.T. Sanders – Book Review 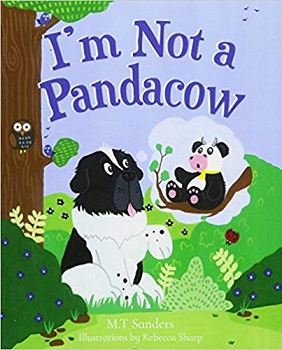 A delightful story about Monty a huge Newfoundland puppy and his journey to find out what he is.

But will asking the other dogs he meets on his travels give him the answers he wants?

Monty has just been bought by his humans (hoomans) and taken back to their home to live. At his new home, there were big hoomans, small hoomans, and other dogs too. The other dogs thought it was a good idea to tease Monty as he didn’t look like them.

Over time Monty grew bigger and bigger and he wanted to know what type of dog he was so he asked his new canine relatives. They laughed at him and called him a Pandacow. Monty knew he wasn’t a Pandacow, but he didn’t know what he was.

This is Monty’s journey to discover just what type of dog he is by asking lots of other dogs. But will one of them give him the right answer?

I’m Not a Pandacow, is a fun, exciting children’s book following Monty the Dog. It is the first in a series about Monty’s adventures. Monty is a lovable dog who just wants to know who he is.

The book features full-page, bright, fantastic illustrations that really capture the heart of the story and are so beautiful to look at. They make the story come alive.

I can see young children asking for this book to be read over and over again as it is so exquisitely written, engaging and lots of fun. It will make you fall in love with Monty the dog.

Monty is a Newfoundland dog who enjoys nothing more than writing books poetry and blogs helped by his hoomans. I’m not a Pandacow is the first in a series of books about Monty’s adventures and has proved an instant hit. Apart from his literary skills Monty is an accomplished fundraiser for various charities and regularly visits schools and nursing homes.

MT Sanders the hooman author has now written three books with the help of his trusty sidekick, I’m not a Pandacow released in April 2017 and currently sold over 2000 copies. Monty and the Slobbernosserus was the very successful follow up and June 2018 sees the third book in the series Monty and Poppit Dragon.

There is also a new Christmas story featuring the dogs.