Tales from the Inner City by Shaun Tan – Book Review

Tales from the Inner City by Shaun Tan – Book Review 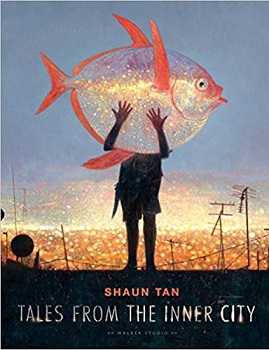 Tales from the Inner City

Where can we live if not in each other’s shadow?

World-renowned artist Shaun Tan applies his extraordinary talent to a reflection on the nature of humans and animals, and our urban co-existence. From crocodile to frog; tiger to bee, this is a dark and surreal exploration of the perennial love and destruction we feel and inflict – of how animals can save us, and how we are entwined, for better or for worse.

Tales from the Inner City is a truly masterly work, bearing all of Shaun Tan’s trademark wit and poignancy in both its prose and exquisite illustrations.

Tales from the Inner City is a strange, yet an eye-opening book about co-existing with animals and what they can teach us about ourselves. It is a book for older children, teenagers, and even adults.

With twenty-five stories about animals, mixed in with poems and some gorgeous artwork, this book has something for everyone. Most of the stories are quite dark and yet very intelligently written.

Shaun Tan has used his stories about animals to reflect the actions, mannerisms, and emotions of us humans. By understanding the essence of the stories you can take a lot of information away about human behaviour and yourself too. It is kind of like a weird self-help book if you look deeper at the stories, or you can just enjoy them and not look for any hidden meanings, the choice is yours.

This is a book to be treasured and delve into now and again. It would make a great coffee table book, one to get people talking. It may even help those going through a change in their lives – especially teenagers to understand the world around them.

Shaun Tan was born in 1974 and grew up in the northern suburbs of Perth, Western Australia. In school he became known as the ‘good drawer’ which partly compensated for always being the shortest kid in every class. He graduated from the University of WA in 1995 with joint honours in Fine Arts and English Literature, and currently works full time as a freelance artist and author in Melbourne.

Shaun began drawing and painting images for science fiction and horror stories in small-press magazines as a teenager, and has since become best known for illustrated books that deal with social, political and historical subjects through surreal, dream-like imagery. Books such as The Rabbits, The Red Tree, The Lost Thing and the acclaimed wordless novel The Arrival have been widely translated throughout Europe, Asia and South America, and enjoyed by readers of all ages. Shaun has also worked as a theatre designer, and worked as a concept artist for the films Horton Hears a Who and Pixar’s WALL-E. He is currently directing a short film with Passion Pictures Australia; his most recently published book is Tales from Outer Suburbia.