One is Evil by Jeff Buick – Book Review

One is Evil by Jeff Buick – Book Review 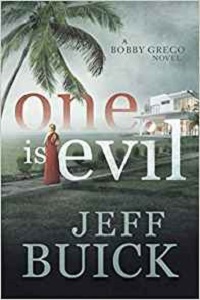 One is Evil
A Bobby Greco Thriller Book One

A wealthy and influential woman whose life is about to be torn apart has only one hope – a disgraced homicide cop. Bobby Greco, set up by dirty cops and thrown off the Orlando force, takes a job investigating insurance fraud. His involvement in a high profile case means no one around him is safe – not even his ex-wife and kids.

Bobby uncovers a secret that threatens someone at the top of the American political system, and as they scramble to protect the country from the fallout, the real endgame becomes clear. Dangerous military technology is at risk of getting into the wrong hands.

From the halls of power in Washington DC to the frozen wastelands of Siberia, the chase is on – and the clock is ticking. This is Book One in the Bobby Greco thriller series, stay tuned for more wild adventures in Bobby’s life.

‘One is Evil’ is the latest release from American thriller author, Jeff Buick. The book is written in the third person and the past tense with fairly short even chapters. The cover is attractive and the title makes sense once the plot develops. In the early chapters, there are four different threads which can sometimes throw me a bit but in this case, everything fitted together relatively smoothly.

We quickly meet successful, wealthy, well-connected people mixing in the upper echelons of American society. Ryan Chamberlain, CEO of Synergy, a company awarded a Pentagon contract to develop a stealth weapon, is happily married to Alexis, a scientist in her own right, and their two children. We also meet our main protagonist, homicide cop, Bobby Greco, who is framed by dishonest colleagues and drummed out of the police service. Their worlds meet when Bobby, now employed by an insurance company, is tasked to look into the circumstances of a death before a large life policy claim is honoured. Little by little, he burrows away to get to the truth but murder is only part of the tale with military secrets, espionage and a highly embarrassing political scandal all on the agenda.

All the main characters are well-defined and Bobby in particular, is likeable and quickly gains the reader’s sympathy. He has a good relationship with his ex-wife and as the story unfolds, a hint of a new romantic attachment is in the offing. There are several peripheral players in this drama but there is no need for the reader to be distracted, as the story moves on at pace.

As with many a tale or dramatisation, our hero tends to over-extend himself on the flimsiest of pretexts, when in reality, other agencies or specialist personnel would be deployed for specialist missions. However, it made for a fast-paced, exciting read.

There are detailed descriptive passages relating to company security and clinical information and whilst I know little about the former, I congratulate the author on his meticulous attention to detail when it came to the autopsy report and DNA data. As to whether readers are interested in such minutiae, I’m not sure but being a fan of thorough research, I was extremely impressed.

If you’re an action thriller devotee, then this book is for you. It’s slightly James Bond-esque with a touch of Mission Impossible thrown in. There is no gratuitous violence or over-reliance on sex scenes; it’s pure escapism from start to finish, with good inevitably triumphing over evil. There were a couple of loose ends which paves the way for certain characters to return in a sequel and I certainly hope that Bobby Greco has another adventure soon. Whilst the plot is pretty far-fetched, it is an ideal read for a cold winter’s day in front of a warm fire. I have no hesitation in awarding five stars.

For Jeff, it’s all about the story. Nothing works without a great story relentlessly driving the action ahead. A tight plot with well-crafted characters means a psychological thriller geared for readers who love an adventure.

Creating the characters who populate his books is second only to the plot line, and there’s no better place to find those characters than in the real world. If you see Jeff in a coffee shop hunched over his computer, say “Hi”, and you may end up as a character in his next book.

Writing is in Jeff’s blood, and over the last twenty years he’s written twenty-one books.

A few years ago Jeff put out five books through a NY publisher, but the industry has changed and in 2019 he’s starting on a new adventure – Indie publishing on Amazon.

Jeff lives in Calgary, Canada, which is wonderful in the summer. Not so much in the winter.