I’m a displaced New Yorker with a penchant for the silly, the obscure, and the fantastical. These days, you can find me in the Tampa area.

Hello there! Jess Haines here. You might know me as the author of the H&W Investigations series—urban fantasy novels about Shiarra Waynest, a human private investigator in an alternate, present-day New York. Somehow she keeps getting pulled into supernatural troubles way above her pay grade… I also have a new series called Blackhollow Academy that follows the adventures of young magi (think wizards) who are on the hunt for their first familiars.

Since my most recent book revolves around magi and their familiars, I would like to explore that topic a bit here.

A familiar is traditionally represented as a small animal or demon companion that serves a magic practitioner. While independent in mind, body, and spirit, they were both connected and subservient to their practitioner, and assisted with the casting of spells, collecting information, and augmenting magical abilities.

In my story, most familiars are summoned as that is the easiest method for a mage to get one. They usually take the form of a small animal, such as a ferret, a mouse, a bird, a snake, or a cat.

The summoned ones are acceptable—but the best familiars are magical creatures that already live on the material plane.

Dragons, unicorns, gryphons, gargoyles, fairies… all sorts of fantastical creatures could be a familiar—if a mage is clever enough to find and convince one to work for them. Having a fae creature at your beck and call, as a friend and maybe even more, can be a heady thing.

On that note, here’s a fun checklist to help you choose what sort of familiar might be the best match for you!

– One of the rarest, most beautiful, and coveted of the Others
– Renowned for their gift of healing; may have other supernatural powers

– If you’re not a virgin, forget it
– Can’t be tamed
– Finding one—let alone convincing one to become a familiar—is about as likely as catching a fart in a windstorm

– A fierce protector of what it considers belongs to it, including territory, family, and friends
– Very handy in a fight
– Saves you a chunk of change on taxi and plane fares

– Gets both fur and feathers all over the furniture
– If it claws the couch, it’s not something you can hide with throw pillows or a sofa cover
– Temperamental; may attempt to eat you

– Lovely, talented, great taste in clothes
– Good at illusion; excellent to have along at social occasions for party tricks

Mermaid
Pros
– Can most likely assist you to achieve your dream of visiting a tropical island sans the inevitable boat or plane ride
– Has an incredible singing voice
– Hair always looks great, in and out of water

– Transportation by land badly hindered
– If it isn’t a pool or beach party, it’s not happening
– Wardrobe is limited to tops. Let’s be real here—there’s only so much one can do with that
– Sushi is permanently off the menu
– Might attempt to lure male friends and/or acquaintances to a watery grave

– Biggest, baddest Other on the block; no one will mess with it, or, by extension, you
– Legendary treasure hoards
– Convenient source of fire for camping trips; roasted marshmallows will never be a problem again

– Might overlook and accidentally step on you
– If you piss it off, it could eat you
– If you touch the treasure, you’re going to get burned to a crisp

So tell me, what sort of familiar would you like to have? See one on the list above that piques your fancy, or do you have something else in mind?

Please feel free to visit and chat with me on the web, address are below in ‘About the Author’: 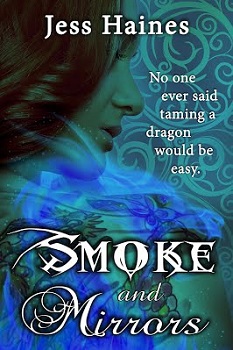 A girl who uses her illusions to fool the world into thinking she’s just like all the other magi.

A dragon who sees through her lies.

Together they just might survive a world that wants to control or destroy them both.﻿

Kimberly may wield ultimate cosmic power, but even a mage has to pay the rent. No one will hire her for her magic talents until she’s got the credentials, so she’s stuck in a crappy rent controlled apartment with her mother, yearning for treats she can’t afford at her part time job in a café, counting down the days until she graduates the secret Blackhollow Academy school for magi. Only then will she have the certificate she needs to land her dream job in a coven.

The problem? She needs a familiar to graduate.

As an illusionist, she doesn’t have the ability to summon or create a familiar of her own. Her only option is to convince a supernatural creature to let her bind it instead. Since having a powerful Other at her beck and call would guarantee her a place in a coven after she graduates—and legendary treasure hoards are an added bonus—she thinks binding a dragon as her familiar will solve all her problems…

Because sometimes a girl needs a dragon, not a knight.

Viper made a soft hissing sound of irritation between his teeth, pulling back from her. “Cormac has no vision. I know what I want and I’m prepared to offer anything to get it. You have but to ask.”
Well. There was one thing. Her cheeks flared crimson and she squirmed a bit before stuttering out another question, swallowing back her embarrassment.
“You keep a hoard like a dragon, right? I don’t suppose you would consider loaning me a little? I swear I’d pay it back.”
His head tipped to one side, and he looked her up and down anew. She suspected he was just noticing her frayed cuffs and cheap shoes. He’d been so intent on getting whatever it was he wanted out of her that he hadn’t paid attention to the package it came in until now. When she caught the very slight curl of his lip, there and gone in a flash, embarrassed heat filled her cheeks.
Feeling both dirty and humiliated, she ducked her head. “Never mind. I shouldn’t have asked. I’m sorry, I don’t think I can do this.”
“Come now, I’m sure it’s not that hard. All it takes is a yes.”
“No,” she said, this time with a bit more vehemence. Cormac was right. There was something off about Viper, and never mind what a perfect ass she’d just made of herself. Worst of all, that flash of disgust showed he obviously had no respect for her. At least Cormac never made her feel tolerated. “Thank you for the offer, but I’ll find some other way of getting what I need.”
He slowly rose to stand, heaving a sigh as he settled back on his heels.
“That’s unfortunate. This would have been much easier if you had agreed.”
Kimberly would have asked what he meant by that, but the look in his eyes froze her in place.
His eyes burned a molten gold as he spread his arms, which were expanding and shifting at an alarming rate. Faster than she might have thought possible, he was growing, his clothing melting and skin disappearing under a layer of metallic scales. Nearby, people were noticing, shouting and screaming in fear as they stampeded in every direction to escape the shapechanging Other in their midst.
When he ceased growing, from the tip of his nose to the end of his tail, he was over thirty feet long, with a wingspan half again that size.
Kimberly sat immobile, unable to so much as squeak in terror as the beast before her lurched back to arch its neck and spread its wings, barbed tail lashing as it growled at her. One thick, talon-tipped paw lashed out, flattening her on the grass and squeezing the air out of her lungs. It gave an awkward, one-legged hop forward to catch its balance before clenching its claws to dig deep furrows in the grass and close around her waist and legs, pinning her.
Then those wide, ribbed wings began to flap, the sun playing off the tones of brass and copper and gold. The ground fell away, people scattering before the airborne monster.
And Kimberly could do nothing but pray, staring up at this great beast that had her in its claws.
She’d gotten what she’d asked for. Now she would have to pay the price.