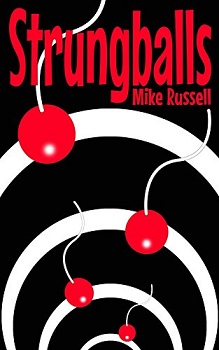 What are Strungballs? Ten-year-old Sydney is about to find out… but first he must have a cube of his flesh removed.

Sydney will transgress everything he was taught to believe in when he embarks upon a journey that will reveal the astonishing secrets hidden by the red balls on white strings known only as… Strungballs.

Inspiring, liberating, otherworldly, magical, surreal, bizarre, funny, disturbing, unique… all of these words have been used to describe the stories of Mike Russell. Remember: Once a Strungball is inserted it must never be removed.

Sydney lives in a white sterile world, from the room, to the walls and even the curtains, everything is white.

The book opens with Sydney lying in a 4m x 4m x 4m room, awaiting to have a piece of flesh removed from his chest. When the procedure was done, he exited the room and was presented with a ‘Strungball’ by his parents. This was placed in the hole that was cut into his chest, with the cord that was attached dangling down the front of his gown. He is warned ‘Once a Strungball is inserted it must never be removed’.

The world that the family live in is made up of people always wanting to do good, where numbers and time are very important, and that the more Strungballs you have, the more important you are deemed to be.

At first Sydney loves his Strungball, but then he learns about the ‘Others’, people who can live without them. He then meets an elderly man, Albert, with lots of Strungballs. Albert puts thoughts into his head, and makes Sydney question his life, so much so, that he removes the ‘Strungball’, but what will happen to Sydney now?

I found this book very strange, but then that was what the author was hoping for. The story is an interesting one, where people believe that some type of ball inserted into their bodies makes them more superior than those without. It’s as if the whole city/world has been brainwashed.

All the residents of the city live in one building, where all the doors are numbered 1-999. The apartments all overlook a life force that is looking after them, and protecting them. This life force is made up of peoples flesh (this is where the pieces of flesh are taken when removed from the residents).

The first half of the book was interesting as we got to know the world, the people and what Strungballs were. The second half got a whole lot weirder as Sydney sets out on a quest to discover the truth about his world. In this half we have inside out giants, trees of veins, giant sex, to name but a few strange things.

Strungballs is interesting, and most positively weird. If you like sci-fi/dystopian novels, then this will appeal to you, and with it only being 66 pages long, you should be able to get through it in one sitting.

Mike Russell is a British author best known for his books Nothing Is Strange, Strange Medicine and Strungballs.

Mike Russell has staged many storytelling performances of his work over the last fifteen years. His shows include the use of handmade props, sounds and improvisations.