The Adventurers and the Cursed Castle by Jemma Hatt – Book Review

The Adventurers and the Cursed Castle by Jemma Hatt – Book Review 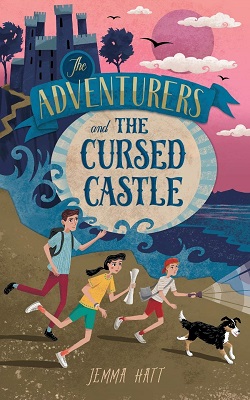 The Adventurers and the Cursed Castle

A mysterious curse has stricken Kexley Castle for generations ever since Egyptian treasure was transported to Cornwall by a 19th Century explorer. Can four young adventurers reveal the secrets that have been hidden for over a hundred years?

Join Lara, Rufus, Tom and Barney in their first exciting adventure together as they unravel the mystery and race to find Captain Jack Kexley’s hiding place. To succeed, they must discover and solve a series of clues left by their ancestor, ahead of two unwelcome visitors from the British Museum who are determined to get there first!

Rufus had come to stay at his cousin Lara’s house for the summer whilst his Grandparents (who he lived with) went on a cruise. However, Lara’s mum gets an important phone call and needs to travel to Egypt right away so she has to find someone to look after the children at short notice.

The kids are packed off to stay with their Uncle Herb (their Grandad’s brother) who lives in a castle. They have never met, nor heard of Herb before. The children soon learn about their Uncle’s eccentric ways, hidden treasure, and a curse that is said to have haunted the family for generations after the owner of the castle, explorer Captain Jack Kexley brought Egyptian artefacts home with him that he shouldn’t have taken.

The children meet up with local boy Tom whose parents work for their Uncle. Between the three of them, and Barney the dog, the kids decide to go in hunt of the treasure but they are not alone. Others want it too, supposedly historians from the British Museum who are ruthless and will stop at nothing to get their hands on it.

The Adventurers and the Cursed Castle is an action-packed, fun adventure featuring three children who want to help Uncle Herb find the treasure he has been looking for, for decades.

The story reminded me of a modern-day The Famous Five by Enid Blyton books, in that children and a dog take it upon themselves to solve a puzzle and have an adventure along the way. However, I don’t believe this is a copy of her work.

The three characters all had their own personalities which bounced off one another and worked well together making the three of them very likeable. The setting was intriguing and the plot fascinating. The secondary characters played their parts well, including Uncle Herb who wasn’t as daft as he first came across.

Overall, it is a great adventure story which was exciting as I waited for the mystery to be solved and kept me turning the pages. This is the first in a series with two more books already released.

Hello! My name is Jemma and I write children’s adventure stories.

Over the years I’ve lived and worked in London, Exeter, New York and Delaware and am now living close to where I grew up in Sevenoaks, Kent.

Reading has always been one of my favourite things to do; during reading hour at primary school I would become so absorbed in imaginary worlds that at the end my name would have to be called several times before I’d notice! One teacher even arranged a hearing test for me! (My hearing was fine – my listening skills, not so much!)

A good book becomes like an old friend, being revisited again and again. I hope to entertain young readers with adventures and laughs to enjoy alongside the characters.

What did you think of The Adventurers and the Cursed Castle? Share your thoughts in the comment section below!